Ghost Of Virgin Mary Seen On The Cornish Cliffs 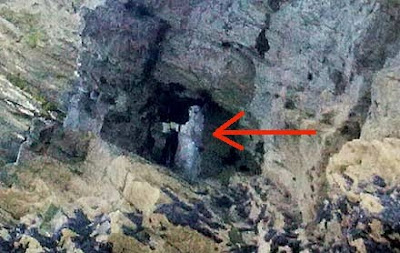 Well, whatever next? The ghost of Virgin Mary has been spotted on the cliffs in Newquay in Cornwall a few miles from where I live. Well that's what the newspapers and media are calling this 'vision' captured on a photo.

Personally I'm not sure why it's supposed to be the Virgin Mary. She looks more like an old fashioned lady carrying perhaps a lamp or even a beer tankard. Oh, and she looks to be pregnant.

But, whatever, the photo was snapped by Caroline Gray last month while she was on holiday in Newquay. She took the photo with her digital camera and later realised that there was a figure by the rocks.

When the photo was taken there was no one else on the beach. Perhaps it's a trick of the light? Caroline doesn't think so. She said, "Some people have suggested that it may be just a light reflection, but the sun was behind the rock face all the time and it would have filled the whole cave instead of just performing a perfect image.

The image was definitely not a natural part of the rock formation as it was not visible at the time."

I've tried to enlarge the image but it's very hazy so, if anything, more likely a run of the mill ghost. I'm sure the Virgin Mary would have put on a much more distinctive display!

Further Reading:
The Voices Of Dead People Captured On Tape
Where Is Heaven?
Her Grandmother Visits Her From Beyond The Grave