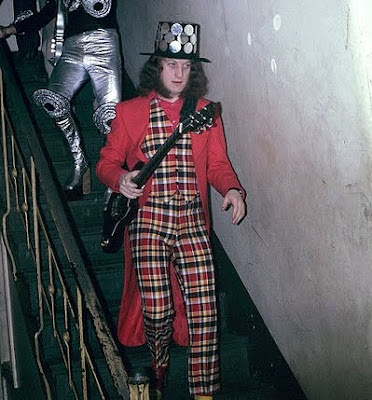 It's interesting how clocks and watches often feature in coincidences and synchronicity. I wrote about my dad's watch stopping at exactly the time my son was born, and on Saturday my post was Her Husband Chimed The Clock From Beyond The Grave. Today here's another example.

This one is from Noddy Holder from the British 70s group Slade.

Noddy's greatest influence was his father who was a window cleaner and also an amateur club singer. When Noddy was just seven years old, in 1953, his dad dragged him on stage at a local working men's club to sing the old Frankie Laine hit I Believe. It was his first taste of being on stage and feeling the magic of the applause.

His dad was a bit of a philosopher and used to keep Noddy grounded by saying, 'You can only eat one meal and wear one pair of shoes at a time. If you've got that, be grateful for it. Everything else is icing on the cake'. They were very close.

Noddy said that the saddest time in his life was when his dad died in 1977 following a longish illness. It took him ages to get over it.

This is where the clock comes in. His dad had a wooden Art Deco style clock that kept perfect time for many years and then it stopped - at the exact time his dad, Jack, had died - 3.30pm.

How or why would it do that without some sort of intervention?

Further Reading:
Her Husband Chimed The Clock From Beyond The Grave
Coincidence and Synchronicity - Example 9