Lives Saved By Picking Up A Hitchhiker 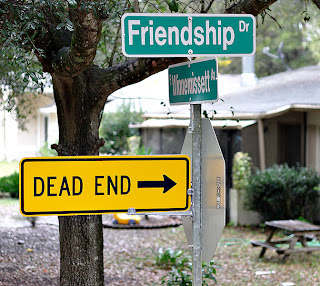 A coincidence story today via the Beyond Religion website. If this woman hadn't have done a favour for a stranger an entire family may well have lost their lives.

A woman from New Castle, PA was in one of the Carolinas. On her way home, she stopped to rest. As she was going back to her car, she noticed a young serviceman sitting on a bench crying his heart out. She sat down beside him and asked him what the trouble was.

He told her that he was on leave and was trying to get back to Akron to the hospital to be with his wife who was in labor. He had just learned that the delivery was not going well and that there was a chance that mother and baby might die. His bus had been canceled and he didn't know what to do.

The woman offered to take him as far as Pittsburgh where he could catch a bus to Akron. He accepted the offer with gratitude. After they had been on the road for awhile, she decided to drive him all the way home and to go visit relatives in the Akron area. She was close to them and did not need to call them first. In fact, she even had a key to their house on her key ring.

She dropped the soldier off at the hospital and drove to the house of her relatives. No one answered the doorbell but she noticed that their car was in the garage, so she used her key and let herself in. The smell of gas in the house was overwhelming. She ran to the kitchen where she discovered that all of the gas jets were turned on as high as they could be. She turned them off, opened the windows, called 911 and went upstairs where she discovered the entire family almost unconscious in their beds. The rescue squad got everyone out of the house even though they were too weak even to walk. They were all taken to the hospital where they were treated and eventually recovered.

They discovered that the grandmother had gone into the kitchen thinking that all of the gas jets were on, and had carefully turned them "off".