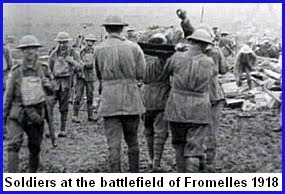 A story I saw a while back on UK television and, after doing a search, also on Australia's Sidney Morning Herald.

It goes back to World War I and the battle of Mont St Quentin in 1918. Many Australian soldiers were killed and now some of their unidentified bodies have been reburied, along with British soldiers. With the help of DNA samples some of the soldiers will now be named on their headstones.

The story I want to mention is about an old cornet musical instrument which was used in the ceremony to play the Last Post.

The reburials of the lost men of Fromelles, conducted with full military honours, unfolded to the haunting sound of the Last Post - played on a battered old cornet. This belonged to the 31st Battalion and was found and bought by a soldier's descendant on eBay.

Peter Nelson, whose grandfather survived Fromelles, had been researching the 31st Battalion when he spotted the cornet. It was clearly inscribed with the name of the company as well as the instrument's donor, a Queensland grazier.

"It was three or four months back and I saw a dealer in NSW put it up for sale. I'm a member of the 31st Battalion association … the battalion is still current in Townsville and in service," he told the Herald newspaper.

"It's battered and bent and seen quite a few years gathering dust somewhere but the dealer who saw it noticed the inscription. I had it restored, a few spare parts and it's back to working order. I got in touch with Michael Whitford, a descendant of one of the men, who put me in touch with General Mike O'Brien. They checked their musicians could play it and now it's on its way to France with the Federation Guard contingent."