The Lungs Of The Planet Illustrated At Eden 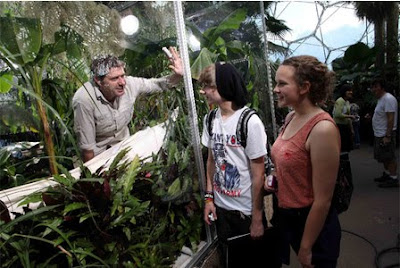 I have mentioned the Eden Project in Cornwall - which is near to where I live - several times, links below.

Eden is about to demonstrate how we humans need plants to survive. To do this they have locked a professor in an air tight chamber - with insufficient oxygen for a person to survive for 48 hours.

Professor Iain Stewart's chamber is 2m x 8m x 2.5m and, along with him, will be 150 plants. It is the plants that will allow him to stay locked up - otherwise the result could be fatal. That's the professor in the photo at Eden.

Professor Stewart explains: "Obviously when I’m in the chamber I’ll be using up oxygen so the oxygen levels will be dropping and I’ll be giving out carbon dioxide, so if it was sustained it would be a lethal combination.

But six to seven hours in, they’re going to switch the lights on.

The chamber is packed with plants, which as soon as the lights come on, start to photosynthesise and should take the carbon dioxide that I’m breathing out, take that in, photosynthesise, and give back oxygen for me to breathe."

The experiment will be included on UK television as part of a BBC series called How Plants Made The World. This should be screened in the New Year.

Plants are the lungs of the planet. Without them we'd be in a right old state ... and yet we continue to destroy the rain forests and trees and ... well, I'm sure you get the picture.