A Batch Of Birthday Coincidences 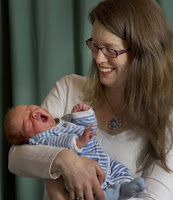 A bit late with this coincidence as it happened while I was away on holiday. It's from New Zealand.

Belinda Lansley had a baby. 'So what?' you may say.

The coincidence is that little Louis was born at 12.13 pm on the 9th of October.

Yes, that's the coincidence as the baby made his way into this world at exactly 9-10-11 at 12.13. So a nice run of sequential numbers, which doesn't happen very often.

Parents Belinda and Stuart Lansley were said to be 'stunned' by the coincidence and Belinda said, "As I was trying to push him out, my husband was saying, 'Oh, wouldn't it be funny if he was born at 12.13', and he was."

Louis wasn't expected until the 18th of October but he must have thought he'd make it an extra special event. He weighed in at 7lbs 5ozs. Just imagine if he'd have been 3ozs heavier - but Belinda and Stuart are happy enough with the result as are Louis' two sisters.

And another baby birthday story ...

Sammy Kellet, from Preston in England, had a baby on the 20th of October - her previous children were also born on the same day - different years, of course! This is said to be at odds of 133,590-1. So baby Kyle joins Keiran, 6 and Kaiden, 3 with ther same birth date. Should be quite a party. Why do all the names begin with 'K'? No idea!

There are similar birthday and birth date coincidences on the following posts: