A Moebius Strip Which Made A Ship Disappear 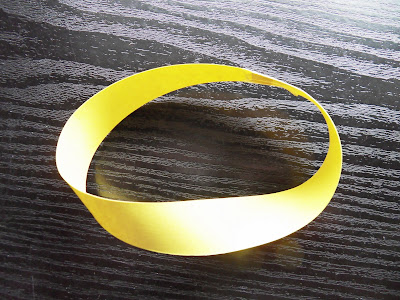 I remember many years ago I was quite intrigued by a Moebius Strip. This is a geometric figure with only one side - as per the example I made earlier in the photo above.

It's not exactly rocket science to make a Moebius Strip as it is simply a strip of paper that has been given one twist with the ends then joined together - but this does only have one side.

If you take a pencil and draw a line down it's centre the line will connect up with where you started - thus proving it has only one side. If you were then to take some scissors, and cut along the pencil line, this would then turn into one large circle (as photo below) - and not two interlinked circles as perhaps might be expected. 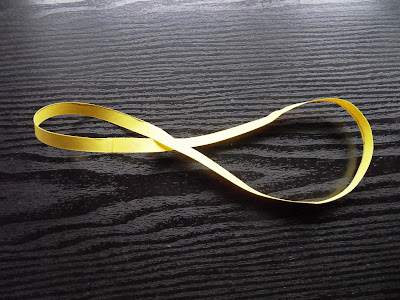 Okay so what has this got to do with a ship disappearing?

It's sort of linked to the Philadelphia Experiment. This is where, back in 1943, US scientists induced a powerful magnetic field on board a destroyer - in Philadelphia. This supposedly led to the ship becoming invisible. It also affected the crew on board. Some became insane, two burst into flames plus others had severe problems.

If this is fact or fiction nobody knows for sure but, it seems, there has been another version of the Philadelphia Experiment. This time the story comes from a Professor Doru Todericiu who obtained the information from Russian Intelligence about American experiments.

It is alleged that the US were experimenting with a magnetic field in the shape of a Moebius Strip.

According to the story a submarine followed a strong magnetic field in the shape of a Moebius Strip, turning over once in every revolution. A special electronic device was then used to cut the field in two and, at this point, the submarine disappeared from view and appeared in another place.

Most will no doubt write this off as fiction but scientists have investigated magnetic fields even within the field of the paranormal.

Way back in the 1920s the British financed research and a Dr. WE Boyd was convinced that electric currents could increase telepathic powers. He created something called an emanometer. With the help of this equipment high scores were obtained by those taking part with card guessing experiments.

In their book Psychic Discoveries Behind the Iron Curtain

Sheila Ostrander and Lynn Schroeder tell about how Russian scientists have improved telepathic communications when the subjects were surrounded by magnetic fields.

I don't think we should write such things as being stuff and nonsense. When the time is right I'm sure we will find amazing powers attributed to magnetic and similar fields.

Other Posts:
The Hologram Theory And Synchronicity
Ley Nodes The Doorways To Other Worlds And Times
Where Is Heaven?