The Tower On a Hill Meeting Coincidence 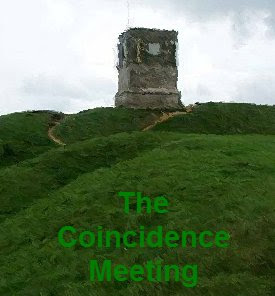 During World War 2, when Catherine Thomas was small, her Sunday School was requisitioned by the army and became a temporary barracks. The soldiers were encouraged to attend the church on Sundays and after a while the family 'adopted' two of the servicemen, and on Sundays they would join them for dinner.

The two men were called Frank and Ron: Frank was missing his recent bride and Ron simply felt homesick.

Catherine writes, "After several weeks, Mum asked Frank if his wife would like to come and stay with us until the regiment moved on, and both were pleased when she travelled South and her husband got a 'sleeping out' pass so that he could join her each night."

This led to a lasting friendship and though Frank and his wife have now both died Catherine kept in touch with their family.

A few weeks back Frank's son and wife travelled to North Yorkshire and camped on a site about 15 miles from where Catherine lives and made a visit to see her. He told her how, a few days earlier, they had visited a nearby beauty spot which has a tower with a spiral staircase and is on top of one of the hills which overlooks Catherine's home.

While at the tower they got talking to a very elderly couple and the old man said he was called Ron.

Ron asked Frank's son whether he knew of the place where he had been stationed in the war.

Ron, for some reason, suddenly realised he was actually talking to the son of Frank, with whom he had been friends during the war. Frank's son looks very much like his father did.

Catherine says, "What a coincidence that was. An old man from Birmingham meeting his pal's family 65 or so years later on top of a hill overlooking the place where they had received such hospitality."