The Ghost Photo Of The National Maritime Museum 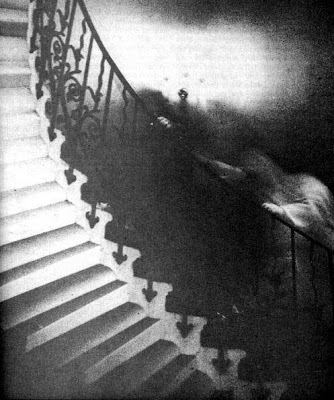 This is one of those classic ghost photos. It was taken by a clergyman, Rev Ralph Hardy, on his visit to the National Maritime Museum in Greenwich, London.

The Rev Hardy, was on a vacation from White Rock, British Columbia and decided to take a photo of the impressive Tulip Staircase in the Queen's House section of the museum. It was only after he returned home and had his film developed that he found the ghostly figure appearing to hold on to the staircase. Experts at Kodak have confirmed that the photo has not be altered or tampered with in any way.

The buildings that host the National Maritime Museum are over 400 years old and there have been other ghost sightings. One example is from a member of the NMM's staff, Tony Anderson. He wrote the following of his experience, again in the Queen's House:

"On Monday 20th May 02 at 9.45am, myself and two colleagues were talking about which breaks we were on, when something caught my eye. One of the doors (double) from the Bridge Room closed and I thought at first it was the girl who does the talks at weekends, then realised the woman just glided across the balcony and went through the wall, west side.

I could not believe what I saw. I went very cold and the hairs on my arms and neck were on end. We went into the Queen’s Presence Room and looked down towards the old Queen’s Bedroom, and something passed through the ante-room and out through the wall. My two colleagues did also feel cold at that time.

The lady was dressed in a white-grey colour, old-fashioned, something like a crinoline-type dress."

Visitors to the museum have also claimed to have been pinched by a ghost and have seen a maid frantically mopping blood from the bottom of the Tulip Staircase. Could this therefore be a genuine ghost photo?

Further Ghostly Reading:
The Dead And The Dying Are Trying To Contact Us
Classic Photos Of Spirits And UFOs
Is This 13th Century Cottage Haunted With Orbs