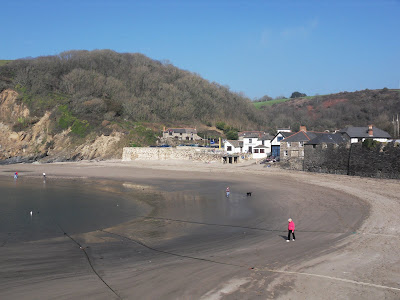 I'm carrying on from Friday's post Menabilly Daphne Du Maurier's Manderley In Cornwall about being in 'Du Maurier country' on the south coast of Cornwall, England. After our visit to the area surrounding Menabilly we walked along the cliff path to the small fishing village of Polkerris.

The photo above was taken from the small harbour wall, which has had a lot of use over the years, as you can see from the stone steps.


Polkerris means in the Cornish language 'fortified pool'. The village has an excellent old world pub and restaurant, the Rashleigh Inn right on the beach. Great place to sit and watch the sun go down in summer while nursing a pint of beer. Photo below. I can't get over how blue the sky is for early March! 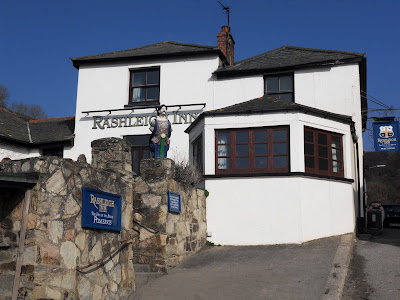 And below is how Polkerris looks - with a photo taken in summer - from the cliff tops looking down. Menabilly, which I mentioned in Friday's post, is reached by walking eastward along the cliffs through the wooded headland at the top of the photo.


Other Cornwall Posts:
The Magic Of Fowey Cornwall
In Search Of The Birth Of Spirits At Eden Cornwall
Menabilly Daphne Du Maurier's Manderley In Cornwall