A Final Coincidence From Somerset - Probably 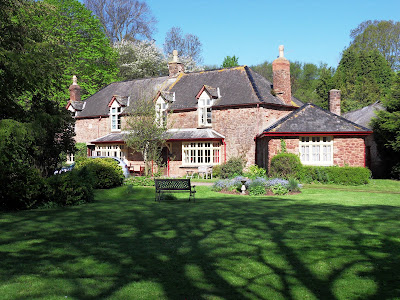 I thought I had covered all of the coincidences and synchronicity I had while on my break in Somerset, until today that is.

Karin and I walked to the local shop to buy a newspaper and on the way back met a man we often see as he walks his dog. We aren't exactly sure where he lives, but it's somewhere nearby. We got chatting and he told us he was off to Turkey in a couple of weeks for a holiday and we mentioned our recent stay in Somerset.

"Where in Somerset?" he asked.

And we told him the name of the house, as in the above photo.

He then explained that the house used to belong to his wife's grandparents or it might have been great grandparents, I can't quite remember.

"That's right," he agreed and went on to explain how his wife used to spend her summers there forty years ago as a child. Her relatives were well known in the village.

Coincidences like this still amaze me. Just shows the links that are all around us without us realising. If he hadn't have mentioned Turkey we probably wouldn't have said anything about Roadwater in Somerset. It's a funny old world.

Other Somerset Posts:
The Lucky Lessons Learnt In Somerset
Synchronicity Starts With Samuel Taylor Coleridge
The Clapper Bridge Where The Devil Sunbathes