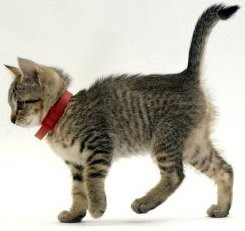 We met a neighbour this morning and he told us he was having some work carried out on his house by a local building maintenance man. We had noticed the van parked outside his home.

He then said words to the effect: "How's this for a coincidence?" He doesn't know I publish this blog.

Yesterday our neighbour was clearing a patch in his garden by his shed that is all long grass and, to put it politely, in a natural state.

As he cut the long grass he found a red collar belonging to a cat named Poppy. It was still in good condition and also had a phone number on a tag.

Thinking no more about it, he put the collar to one side.

This morning, when the builder arrived he noticed the phone number on the side of the van and thought it seemed familiar. He had used a mobile number to contact him previously.

It then dawned on him that the number on the cat's collar he had found was the same as the one on the van.

He showed the collar to the builder who was quite amazed. The collar belonged to his cat, Poppy, and had gone missing about five years ago! It must have come loose because it had a quick release catch so that Poppy could never strangle herself if she became trapped by the collar.

How strange that the collar was found one day previous to the builder arriving - after being there for five years.

Other cat coincidence posts:
Winnie The Cat Was Returned After Five Years
The Cat Who Just Wouldn't Go Away
The Power Of Lilly The Life Saving Cat