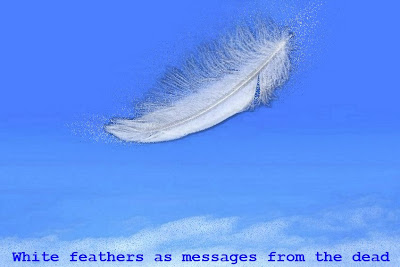 I was Googling the words white feathers to check if any posts I have published on the subject have a decent ranking and I came across the following story on the Total Essex website.

Nicola Ford who lives in Hutton, Essex was telling of the recent strange happenings in her house. One of the things she mentioned was about how white feathers have been found dotted around her home and the smell of a perfume, that she doesn't use, often fills the air. This is something I can personally relate to. I remember how, after my dad died, I saw white feathers and could at times smell his special brand of tobacco - even though no one smokes in our house.

Many of the other things Nicola talked about were something completely different.

First her television switched on by itself in the middle of the night, a candle fell over mysteriously and a pair of glass angels in her bedroom rotated by themselves. She also sees shadows out of the corner of her eye.

I'm sure this would have given me the collywobbles but Nicola is calm about such happenings. Why? Because she believes it is her late mother, Hazel, watching over her.

Nicola told Total Essex, "I just think I've got mum letting me know she is about. The fact that mum was very spiritual and believed in spirits herself makes me think it is her. I find it comforting. It isn't malicious – it isn't as if I have things flying across the room trying to hit me. It is just things being moved."

Peculiar things, however, have happened to Nicola's son Robbie, 16, and her six-year-old white and ginger cat Fifi.

She explains, "When mum died Robbie had some quite negative experiences. He saw some quite nasty things in his bedroom like nan's face coming towards him and then turning into a scary face. As for the cat, she's always looking at or following something that we cannot see. What is happening here is paranormal."

What interests me in this story is the white feathers aspect, as they tend to appear over and over following a loved ones death. There are so many experiences about this, many I've published on this blog. Surely we can't all be deluded.