Who Is Pulling Your Strings? 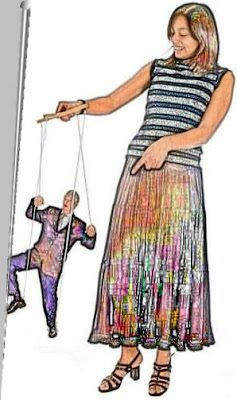 Sometimes I wonder if my wife is pulling my strings!

After doing something or other I was sitting in the living room reading the newspaper while Karin was making a strawberry cream cake in the kitchen. Our son and family were coming over in the evening. It was then like I heard a voice in my head which said, "Christmas decorations."

We have a spare bedroom that rarely gets used and, after we had taken down the Christmas decorations, I placed them in a box and put the box in the spare room. Okay, I know it's five months ago and I've been lax.

Anyway, I got up from my chair, left the newspaper, went upstairs, got the decorations and put them in the loft where they normally live while not in use.

I then went into the kitchen to see how my wife was getting on with the cake. She'd heard me rummaging about and asked me what I'd been doing. I told her and she smiled. "I was just going to ask you to do that," she said.

Telepathy? Don't know, but about an hour later I was on the computer and this time remembered how a net curtain rail had fallen in our dining room. "Ah," I thought, "No More Nails will fix that." It's a sort of glue and the rail is only very light.

So downstairs I trot, in full DIY mode, and into the garage to get the No More Nails, but it wasn't in the cupboard where it should have been. Most odd.

I went into the dining room and there was Karin with the No More Nails having fixed the curtain rail.

"When did you decide to do that?" I asked.

"About five or ten minutes ago. I thought No More Nails might work."

So, telepathy again? Or simply on the same thought band?

I know we've been together a long time but I don't really want Karin to know all my thoughts. Even in marriage there has to be a few private thoughts, doesn't there?

"Tea, a cup of tea. Now that would be nice," I think privately.

I'm sure she's hacked into my mind!

Other Telepathy Posts:
The Sixth Sense Between Soul Mates
Telepathy Between Husband And Wife
Voices Told Woman She Had A Tumour