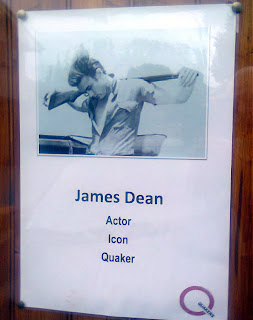 I was wondering what to write about today so went for a walk instead. As I passed a house near the local brewery I saw there was a new picture on the notice board attached to their garage.

The owners have been displaying famous Quakers and change the photo every few weeks. I presume that they themselves belong to the Religious Society of Friends.

Today was a photo of the actor James Dean who was killed back in 1955 following a car accident.

For some reason the Quakers have always appealed to me, though I don't necessarily go along with their beliefs. I continued my walk and then realised I would also be passing The Quakers Meeting House which dates back to 1829, photo below.


It was then that I remembered there were several coincidences from when James Dean was killed while driving his Silver Spyder Porsche sports car. The car was said by some to be cursed.

After purchasing the car Dean was introduced to the British actor Alec Guinness and he took him to see his new Porsche Spyder. Guinness is said to have thought the car to be 'sinister' and said to Dean: "If you get in that car, you will be found dead in it by this time next week." Their meeting was on September 23, 1955 - seven days before Dean's death.

This was a coincidence in itself, or maybe something more. Did Guinness perhaps sense something? Who knows, but following the fatal crash some sort of curse does seem to have clicked in.

The damaged car was bought from Dean's family by car customiser George Barris. While in his garage the car slipped and fell onto a mechanic, damaging both of his legs. This was the start of a series of unpleasant happenings. Of course, after so many years, these stories may have been altered and exaggerated. It's hard to tell.

Barris sold the car engine to a Doctor Troy McHenry who put this in his racing car. The Doctor was killed shortly afterwards when racing at the Pomona Fair Ground.

In the same race William Eshcrid had purchased the driveshaft from Dean's car. He was seriously injured when his car turned over.

George Barris sold two of the tyres from the Spyder, both are said to have blown simultaneously and nearly killed the driver.

And so it went on:

When the Porsche was later repaired, the garage it was in was destroyed by fire.

The car was displayed in Sacramento, but it fell off it's mount and broke a teenager's hip.

In Oregon, the trailer on which the car was mounted slipped from it's towbar and smashed through the front of a shop.

Finally, in 1959, the car mysteriously broke into eleven pieces while it was sitting on steel supports.

There were also other precognitions besides the one from Alec Guinness. James Dean took Eartha Kitt for a run in the car and she is said to have warned him, "James, I don't like this car; it's going to kill you."

And maybe even Dean himself felt a precognition. Prior to his death, he gave away a kitten that Elizabeth Taylor had given him on the set of Giant. He told a friend why he did this, "Some day I may go out and not come back."

So that's how this post came about. I didn't know what to write about but followed the trail from the Quakers to James Dean's cursed car.

Other Celebrity Coincidence Stories:
JK Rowling And Harry Potter Birthday Coincidence
Chris Evans Will Be With His Wife Till Hell Freezes
Bryce Dallas Howard And Her Family Of Psychics