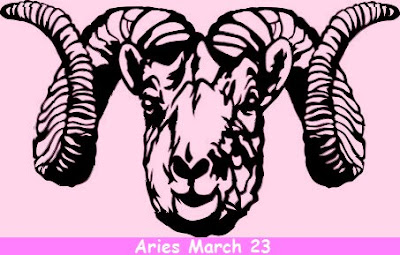 "I daresay you haven't had much practice,"
said the Queen ...
"Why, sometimes I've believed as many as
six impossible things before breakfast."

I've never believed those horoscopes that you read in newspapers and magazines - unless they forecast something good! But in saying that I have noticed how some people born under certain sun signs do have similar traits.

What made me think of this again was a small newspaper cutting I clipped recently following the Olympic Games. This is what was said - but I'd better add that this was in a UK paper and therefore biased to us Brits.

"I'm not a great believer in star-signs but wonder what to make of the fact that Roger Banister (the first man to run a four-minute mile), Olympians Steve Redgrave, Chris Hoy and Mo Farrah, as well as British speed record breaker Donald Campbell all share the same Aries birthday of March 23."

I wondered, therefore, if March 23rd is a good day to be born if you want to be a sports star. So I went to Wikipedia to see some famous births for that date.  There are 73 listed births from 1960 onwards and 41 of these are famous worldwide sports people - 56%!

Okay, Wikipedia is far from perfect for many reasons but it's an impressive statistic. Okay - again - it's nothing scientific and many will say is therefore meaningless.

But, whatever, when we observe people there does seem to be varying categories. How often have we said that so-and-so looks like someone else. If this is down purely to star signs is debatable but sometimes, even though I have minimum knowledge of the subject, I will pick out someone as a typical Leo, Aries and so on.

In the 70s someone gave me Linda Goodman's Sun Signs. I still have the book and flitted through the Aries section, applicable to someone born on March 23rd. I read:

And those are surely the requirements of an Olympian or top sports person - and, being able to believe in 'impossible things before breakfast' of course.

Other Sports Stories And Posts:
The Inspiration Of The Paralympics And 7/7
Golf Hole In One Coincidences

Email ThisBlogThis!Share to TwitterShare to FacebookShare to Pinterest
Labels: Coincidence and Synchronicity, Coincidences in the Media, Star Signs