The Ghost Sitting On Kate's Bed 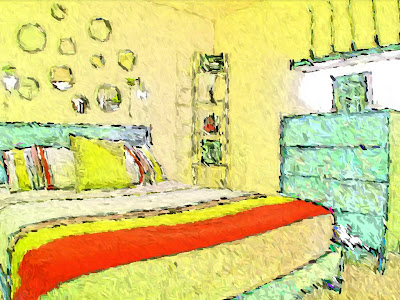 We are on the ghost story trail again today with an experience from Kate which, she says, happened to her a couple of weeks ago.


"I read your post written by Celia (see The Ghostly Girl Buried Behind A Cellar Wall) and am sending you my ghost story. No one else believes me but it is true.

I'm 17 years old and my mum and dad always work late. They have their own business so I am often on my own after college. I usually do my study work before anything else.

Two weeks ago I was in my bedroom and I heard the doorknob of my bathroom move. It makes a strange noise like it needs some oil. I looked in the bathroom but nothing was there. I thought it was my imagination and got on with by studying.

Five minutes later I heard another noise and it was like someone had jumped on my bed. I turned round and again there was nothing there.

I went to turn on my light as it was starting to get dark. As I did so I looked in the mirror and there was someone sitting on my bed!!  It was a young man and he had a strange smile which was quite eerie as he looked at me. I quickly turned round to face him but there was no one there on my bed.

I was well spooked so I headed out of my bedroom and again glanced in the mirror and there was the man again still with his silly grin. I was really scared and ran down the stairs. There was a shout, like a scream, so I left the house to run to my aunt's house who lives quite near.

My heart was pounding and I was trembling. My aunt laughed when I told her why I was there and what had happened. She thought I was making it up.

It has never happened again but I will not stay in our house on my own and feel shaky when I walk into my bedroom, even when I know my parents are home.

I have told mum and dad but they also laughed it off and said I had been watching too many horror films but I know what I saw and it wasn't my imagination like everyone else says it is."

Other Ghost Posts on 67 Not Out:
The Ghost Of A Nun Was Herself In A Previous Life
Classic Photos Of Spirits And UFOs
12 Ghostly Ghost Story Experiences