Do Some UFOs Program Us To Forget 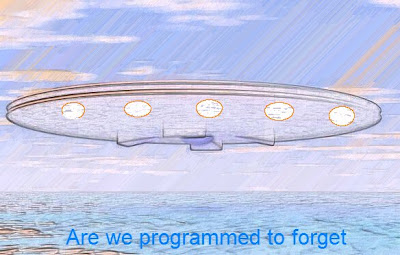 I was reading Trish and Rob's blog and their post Dreaming UFOs and it reminded me of something a friend told me quite a few years ago. For various reasons I'll have to call him by another name: James.

James told me of a dream he had about seeing a UFO, at least he thinks it was a dream but isn't absolutely sure.

He was standing in his garden late one evening. It was summer and the sky was clear and quite light. His house is one of many in a row, all next to each other.

He looked up and, as if from nowhere, he saw what he described as a UFO, but it was massive in size. The vehicle was much wider in circumference than his house. It hovered directly above his rooftop but was completely silent and seemed to cast a shadow over his own house and the houses on either side. Obviously anyone else nearby would also have seen this UFO.

He described it as a silvery-grey colour with what looked to be round windows beneath, perhaps a dozen and each glowed with a dull light. These were in a circular pattern around the edge of the UFO.

The vehicle stayed absolutely still for an indeterminable period and James felt affixed to where he was standing and developed a sense of light headedness. Then suddenly the UFO was gone. It just disappeared. No movement it simply vanished.

James went indoors and the next thing he was aware of was waking the next morning but remembering his dream.

After a few days though he began to wonder if what he saw was actually for real and not a dream. He couldn't make up his mind. One minute he was sure it was a dream but then something seemed to click in his mind and he thought it had actually happened.

James asked his neighbours if they had seen or even heard anything on that particular evening but they said that they hadn't.

Several years later, after the incident, James came up with a theory that perhaps we are somehow programmed to forget a range of happenings in our lives. Things that perhaps wouldn't be accepted by the world at large.

The only thing I can relate to this theory personally is a 'dream' or 'reality' I had as a child of about 7 or 8 and is nothing to do with UFOs or anything spooky or spiritual.

I believe I saw the road outside of where I lived with my parents covered with small insect like creatures perhaps akin to flying ants. There were thousands of them and the whole road was completely covered so that it was impossible to see the surface below. I'm sure I saw these 'insects' in reality but my parents didn't nor did anyone else. In this case, being programmed to forget, seems pointless ... or maybe it isn't, who knows.

UFO Stories and Experiences:
The Aircraft Swallowed By A UFO Mystery Updated
UFO And Alien Sexual Encounters
The Bizarre UFO Mystery And a Man Found Dead