Helicopter Landed In Her Garden Coincidence 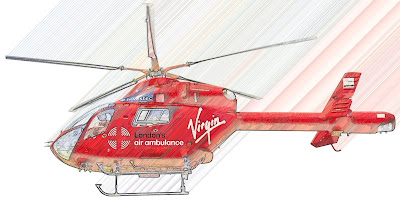 Here's a slightly unexpected story by Mollie, with a coincidence in it's tail.


"A day I shall remember for a long time is the 11th of September 2012.  It was a warm sunny day and at 2.30 pm I was sitting in my back garden, enjoying an ice-cream when I heard police and ambulance sirens in my road.

About five minutes later, a helicopter was circling above my bungalow. I could see it was the London Air Ambulance and thought it must be looking for somewhere to land.

A few moments later it hopped over the top of my bungalow.

I rushed indoors and, looking out of the front door, I was amazed to see it landing on my front lawn.

When the rotor blades had stopped turning I ventured outside and spoke to the two pilots. They apologised for blasting away my plants and troughs that had adorned the bay windows.

They said our lawn was the nearest clear space near to where they wanted to land. Neighbours appeared with cameras to capture the moment.

The Air Ambulance had been called to an accident a few houses away. Fortunately they weren't needed as the man who was injured, falling from a tree, had recovered well.

After spending two hours on my lawn and enjoying tea, the pilots were able to return to base.

By coincidence they knew my nephew!"