Coincidence Of The Stabbing From 21 Years Ago 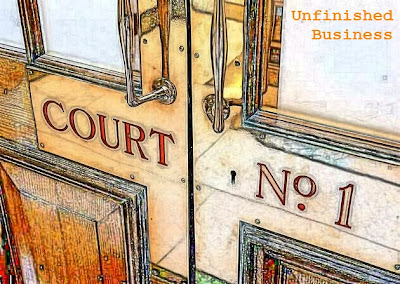 In December 2010, by a bizarre coincidence, Jolly moved into a flat (apartment) above where Harrington lived in Folkestone, England. Neither lived in the area when the original assault occurred.

Folkestone Magistrates Court were told how, after Jolly had moved in ... "The two were talking out of the window of their flat and one said he had grown up in Ealing and the other said he had as well. They exchanged names and Mr Harrington realised who his new neighbour was and felt nervous when the defendant said: 'Hold on, I'm coming up'."

"But Jolly apologised telling Mr Harrington that he was young and stupid, and they had a drink together."

The two men became friends, but this isn't the end of the story.

The This Is Kent website reports that the friendship only lasted until April of this year when, "Jolly began a campaign against Mr Harrington and in a torrent of text messages told him 'I should have finished you off in 1991', and made a series of threats making it clear he wanted to kill Mr Harrington."

This was the reason why Jolly was in the Magistrates Court.

Jolly faces five charges: threatening to kill Christopher Harrington between September 4 and September 11 in more than 30 text messages, harassment over the same period of Mr Harrington, two charges of sending false messages on e-mail with intent to cause anxiety and conveying a message to Kent Police for the purpose of causing annoyance or needless anxiety. It is alleged that he sent a message to police that he was planning to carry out a worse attack than Britain's three most notorious gun massacres.

It's strange how Jolly and Harrington were drawn together again by 'coincidence' following their first problem of 21 years ago. Perhaps the two have something to overcome going back to previous incarnations. Some links aren't easily broken.

Other 67 Not Out Posts:
Google Street View Photo May Solve A Crime
Bizarre Coincidence Of Newspaper Photos Gets Man Arrested
Coincidences And The Portuguese Rooster of Barcelos