She Died But Was Visited By Her Living Daughter 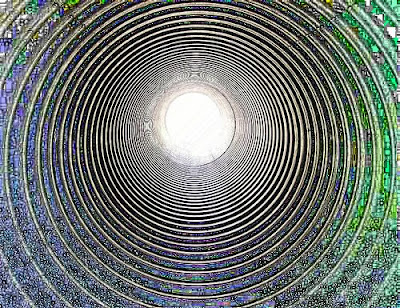 Many people who describe their Near Death Experiences (NDE) talk of seeing Heaven, perhaps their 'dead' relatives and so on but it was different for Amanda Cable who told her story to the Daily Mail.

Amanda didn't see her deceased loved ones but instead saw her young daughter, who was very much alive. But let's start at the beginning.

Amanda developed a severe pain in her side, which gradually got worse. She was visited by her doctor who immediately called for an ambulance and she was whisked away to hospital.

The hospital discovered she was pregnant but the baby was ectopic and had therefore developed inside the fallopian tube instead of the womb. As Amanda had lost a lot of blood she was kept in hospital. This was particularly upsetting as her young daughter, Ruby, was about to start school and she so wanted to be with her on that special first day.

It wasn't possible to go home. The next day she could hardly breath and suddenly all hell broke loose. She heard the doctor telling her to, "Wake up, stay with me." She heard an alarm bell ringing and the doctor was now shouting, "She's tachycardic"

Her bed was immediately rushed to the operating theatre. She says, "I remained strangely aware of everything around me. I remember the entire medical team swearing. I fought to stay calm and thought of my three children ... who were unaware their Mummy was dying ... death was beckoning me."

It was then that she felt, "my entire body being sucked into the white light. I found myself in a white tunnel and knew I had died ... there was a wonderful sense of calm."

Amanda tells of how she felt no fear and knew she would soon join her loved ones who were already on the other side. She felt ready to accept this.

She became aware of someone near to her and imagined it might be her late grandmother but instead - much to her surprise - it was her daughter, Ruby!

Amanda explains, "Ruby was wearing her new school uniform and had her hair tied neatly in bunches. I'd never seen her in her uniform and she'd never allowed me to put her hair in bunches."

It seems young Ruby was in control of the situation as she told her mother to follow her down the white tunnel - at the end of which was a gate. Amanda knew her relatives were on the other side. Her little girl instructed her to step through the gate. As she did so Ruby slammed the gate shut rapidly behind her. This action jolted her whole body. Amanda says, "I am sure it was at this moment that the defibrillator pads were were being used by the medics and shocked my heart back into rhythm."

She knew then that she would survive.

Her husband was allowed to see her later and had with him a photo he had taken of Ruby. There she was wearing her new school uniform on her first day but, most noticeable, was that her hair was in bunches.

Ruby had allowed her father to put her hair in bunches for the very first time - exactly as Amanda had seen while she was with her in the white tunnel.

And finally in Amanda's own words, "I will never be able to understand what happened on that fateful day. But I no longer harbour a fear about death. And at the same time, I have stopped being scared of life. I have never looked back since."

Email ThisBlogThis!Share to TwitterShare to FacebookShare to Pinterest
Labels: Life After Death, NDE