The Biggest Coincidence There Has Ever Been

I know I have said something similar along these lines before but it's something I woke up thinking about this morning - and all because I have been doing some research on my family tree.

If  I look at the number of people who follow on from John Perry, born in 1839 (Father of Frederick in the photo), they amount to a considerable number. Now just think if he hadn't have met Emma, born in 1840, none of those people would be here now - including Frederick, oh, and me.

Who knows, John and Emma could have met by what many would call a coincidence. If that hadn't have occurred life would have been vastly different for many other people - including my wife, as she would never have met me.

So the fact that any of us is actually here at all is the biggest coincidence there has ever been. Or perhaps it's fate and was all pre-planned - John was destined to meet Emma. But was he?

Sometimes we hear about how some people view themselves as unimportant in life. But this is completely untrue, we are all important, essential links who have helped to create the world today and what it will be like in the future.

If we are lucky enough to have children there could well be millions of people who are likely to follow on because of this. How we influence our offspring will be carried forward over generations to come.

But it's not simply by breeding that we have influence. We also have an impact, in varying degrees, on everyone we meet or contact in any way. What we say or do causes an effect, whether for good or bad. It's why bringing up children, to the best of our ability, is so important. It can influence the future.

Okay, that's it, just spreading a titchy bit of influence ... 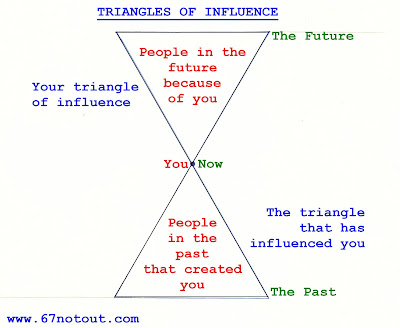 Other Random Posts:
Dreams As Calling Cards From Her Dead Father
What A Coincidence That We Are Actually Here Now
JK Rowling And Harry Potter Birthday Coincidence