The Guardian Angels Waiting To be Summoned 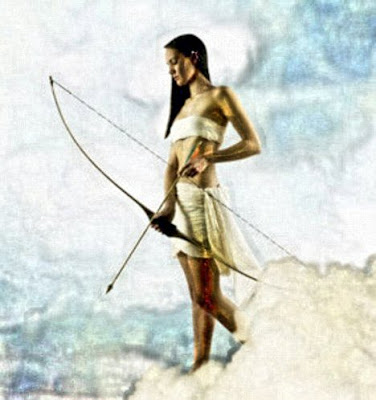 Nowadays we often talk about guardian angels and, for some reason, I presumed that this idea originated from within Christianity. But it seems other religions have equivalents.

In Islam there is a term al-mu'aqqibat which means those who follow one upon another. Some scholars claim that these are similar to guardian angels

"When I was a child I thought I saw an angel. It had wings and kind of looked like my sister. I opened the door so some light could come into the room, and it sort of faded away. My mother said it was probably my guardian angel."
~ Denzel WashingtonIt is said in Islamic teachings (as I understand it) that God assigns two angels to each of us throughout our lives. One sits on our right shoulder and the other on our left. These are called kiraman katibin and record our actions, thoughts and feelings from puberty.

The angel who sits on the right shoulder records the good that we do while the angel on the left records our bad deeds. So we can't hide much from God! On the Day of Judgement each person will be confronted with this record - and the two angels will be present to tell God of what the person did.

Thinking about this though these angels differ from the popular, more western versions as they do not seem to step in and help the person they are with - they purely record events. But, in saying this the Qur'an states (Chapter 13 Verse 11) "For each person there are angels in succession, before and behind him: They guard him by command of Allah."

An Irish Blessing:
These things I warmly wish for you: someone to love, some work to do, a bit o' sun, a bit o' cheer, and a guardian angel always near.I have read that Muslims sometimes say, "Peace be upon you," while looking at their left and right shoulders - where the angels reside - as they offer their daily prayers.

If we move on to Hinduism there is a belief that all living things - people, animals, plants - have a deva assigned to them to guard and help 'us' understand the universe and how we can become one with it.

Going back to Christianity I have a cutting (sorry, don't know source) which states:

There must be a convey of guardian angels, working twenty-four hours a day, looking after me ... Like the night I first got to Nashville and laid down in the middle of Broadway, waiting to get run over. It didn't happen ... I could swear they were keeping me alive just to see what I'd get up to next, I'm glad they feel that way.
~ Willie Nelson"In Catholic Christianity, believers say that God assigns one guardian angel to each person as a spiritual friend for the person’s entire life on Earth. The Catechism of the Catholic Church declares in section 336 about guardian angels: 'From infancy to death, human life is surrounded by their watchful care and intercession. Beside each believer stands an angel as protector and shepherd leading him to life.'"

I like the idea of having a Guardian Angel, but then I have my doubts because some of them don't appear to being doing a very good job on behalf of the people they are supposedly looking after. I think the answer to this is that we have to actually ask for help or guidance on matters of life. Maybe if we don't ask, we don't get.

For every one that asketh receiveth; and he that seeketh findeth; and to him that knocketh it shall be opened."

Random Angel Posts on 67 Not Out:
The Guardian Angel Who Saved Her From A Car Crash
Her Guardian Angels Visited Her In Hospital
The Angel Helpers And White Feathers