A Power To Give Direct Access To A Superior Knowledge 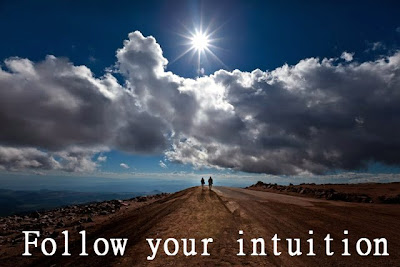 I remember ages ago, while in the Rosicrucians, being told that man is an intuitive being. It's something that I agree with entirely, though so much of the world mocks such an idea.

When I was managing an office of a finance and loans company they were always sending me on courses where I felt like a fish out of water. At one time the subject was all about recruiting the right staff. I said I used intuition. This caused a massive negative reaction from everyone concerned, it seemed I was on the edge of insanity! They went on to try and explain how to recruit 'properly'. It seems that there is a special formula to follow - but I immediately 'forgot' this once I was back to my office.

Anyway, the following is from my ancient cutting's file.

While it is true that in most people this intuitive faculty is dormant and needs to be awakened, the potential is there waiting to to be recognised and employed. No doubt one of the most wasteful practices of the average individual is the constant neglect of this inner faculty we call intuition.

Intuition is a natural integral part of man's nature, and it will function freely and effectively if one does not interfere with its performance.

This faculty is generally much more evident in the lives of children than in most adults. This is because intuition is a natural attribute of the inner life which is all too often ignored or stifled as a result of negativism and by squelching opposition from the outside world during years of maturity.

After years of failure to recognise and exercise this capacity for intuition, it becomes dormant. Just as a muscle in a person's arm will tend to become weak through lack of exercise, so will the intuitive faculty lose its strength and effectiveness through continued neglect and inactivity.

When one is caused to realise the inactive status of his intuitive faculty and wishes to reactivate it, he will need to pursue his goal with fixed purpose and constant effort.

When the first efforts are made to restore this hidden power of insight to its proper function in life, its diminished voice is scarcely heard amidst the clamour of the objective world.

As the individual continues to listen and respond to this quiet call, then that which was heard only faintly and indistinctly at the beginning is heard with a constantly increasing degree of clarity.

If we fail to gain that knowledge which is available only through intuition, we deprive ourselves of the highest and most authoritative knowledge."

So there we go: use it or lose it!

Random 67 Not Out Posts:
Are We Simply A Bunch Of Memories?
Avoiding Train Crashes And Other Disasters
Presentiments Sent To Warn And Advise Us

Email ThisBlogThis!Share to TwitterShare to FacebookShare to Pinterest
Labels: Intuition, Power of the Mind, Rosicrucians