The Albert Einstein Coincidence Of Pi 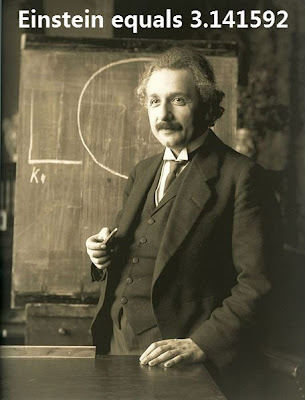 Einstein is often attributed as saying: 'Coincidence is God's way of remaining anonymous.' So maybe the following is relevant.

He was born in Ulm, in the Kingdom of Württemberg in the German Empire on 14 March 1879 or. In the USA you would write this as: 3.14 - and, of course, Pi just happens to be 3.14 - though its decimal representation never ends and therefore lives on forever - one of the aims of the Philosophers' Stone.

Is it a coincidence therefore that Einstein was born on 3.14? Oh, and what about his name:

Eins in German is 'One' and Stein in German means 'Stone' - The Philosophers' Stone?

Going back to Ulm, where Einstein was born, this is now the site of a university based on the idea of it being a 'science city'. The address of the Ulm University is, of course, Albert-Einstein-Allee, Ulm.