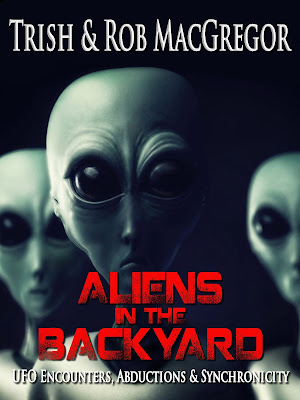 My blogging friends Trish & Rob MacGregor have just published a new book Aliens in the Backyard. But before you say, "Oh, yet another rehash about UFOs and aliens," it's not! They have taken a different approach and as Trish told me, "We think we’ve written something unique." I'll let Trish and Rob explain:


"We’re excited about this book for a number of reasons. While the topic of alien abductions has been around for a few decades now, we take an approach that is distinct and unique.

In essence, Aliens in the Backyard is our third book on synchronicity, following The 7 Secrets of Synchronicity and Synchronicity and the Other Side. We haven’t seen any books that take a close look at the abundance of meaningful coincidences that often occur in the aftermath of UFO encounters or abductions. For Charles Fontaine, one of the four experiencers whom we focus on, such synchronicities were startling, mind-blowing. They also led him to us.

Beyond synchronicity, we uncovered a specific type of psychic ability that many abductees and experiencers developed in the aftermath of their encounters. We call them ‘planetary empaths.’ They are so attuned to the planet that hours or days before a planetary disaster – earthquakes, tornadoes, volcanic eruptions, tsunamis and even man-made disasters like 9-11- they experience a wide variety of physical symptoms and know that something big is coming.

We also explore the possible connections between an American naval base in the Bahamas known as AUTEC – Atlantic Undersea Test and Evaluation Center – and USOs – unidentified submerged objects – and the Bermuda Triangle. We have stories from people who worked at AUTEC about some of the incredible things they experienced. We’re also the only UFO investigators who actually talked to the commander of AUTEC about UFOs…and that was another synchronicity.

We started out the book in a way that might surprise some readers in that the first chapter deals with a trip to an island in southern Chile to investigate a ghost ship, the Caleuche. The legend of the Caleuche, which many islanders believe are based on real experiences, is closely linked to the abduction phenomenon in that the mysterious ship is manned by a crew of brujos, or witches, who abduct islanders.

Besides Charles Fontaine’s dramatic story that take place in Quebec, we follow the story of pilot Bruce Gernon, who was pursued by a ‘cloud’ while flying through the Bermuda Triangle. We also write about Connie Canon’s experience with aliens on a military base, and Diane Fine’s story of losing a baby during an apparent abduction.

While many serious books about ufology avoid the topic of abductions and rarely mention synchronicity, we pursue both topics with a sense of adventure. While the 'old hippies' of ufology might shrug and say, ‘Oh, another book about abductions…ho hum,’ we think we’ve written something unique. We think we have a winner!

How To Get Aliens In The Backyard:
Aliens in the Backyard - Amazon Kindle Edition

Other Books From Trish & Rob MacGregor on Amazon:
The 7 Secrets of Synchronicity: Your Guide to Finding Meaning in Signs Big and Small

Synchronicity and the Other Side: Your Guide to Meaningful Connections with the Afterlife

The Everything Dreams Book: From Fantasies to Nightmares

Details of more Trish & Rob books:
Trish and Rob have published over 70 books, both fiction and non fiction. Further information can be found on their blog synchrosecrets.