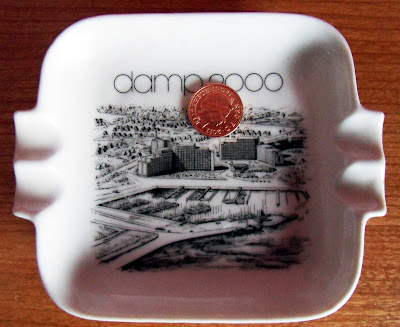 A short but unexplained incident.

My wife went upstairs to our bedroom for something or other and was thinking about money. As she went into the room she heard a sort of tinkling sound like something metallic had been falling and then landed.

The sound came from the direction of my side of the bed, so she took a look. On the small set of bedside drawers I keep an ashtray - no I don't smoke, it's something that has sentimental attachments. Anyway, Karin looked in the ashtray and there it was - a shiny penny.

She is definite that this was the clink or tinkling noise she heard - a penny falling into the ashtray.

I know to most this will sound nutty, as pennies don't usually fall from heaven - or even from bedroom ceilings!

Have I an explanation. Not really. What I can say is that my wife is always finding coins when we are out and about walking. I've written about this a couple of times, including back in January 2010. We've got a container full of her findings.

I also published a post, again in 2010, about a ghost who left old pennies. Nick White, who found the ghostly pennies, said at the time, "There's no logical explanation for the two old pennies turning up like they did ..." So maybe this sort of thing happens more than we think, but doesn't get reported.

Oh yes, and I also wrote about how my wife's wedding ring rolled across the bedroom floor at 3:33 in the early hours of the morning.

There we go, pennies from heaven. I keep telling her to think bigger amounts. £50 notes from heaven would be very acceptable!

P.S. The ashtray is from Damp 2000, now just called Damp. This is in Schleswig-Holstein. Northern Germany which is the area where Karin was born and raised. I first went there with her before we were married and it was thought, at the time, to be very futuristic. This would have been in the mid to late 1970s. We had a meal with her brother in the restaurant and he asked the waiter if I could have an ashtray as a souvenir.

It's interesting to me that within the confines of Damp is Red Maass a stone circle dating back some 2000 years. There are nine boulders and more rectangular stones at the cardinal settings. It is thought to be a place of sacrifice.

Other posts which tie up with this post:
The Ghost Who Leaves Old Pennies In A Tyre Depot
333 And A Paranormal Ring Or Perhaps Not
The Art Of Finding Coins