The Brotherhood Of The Snake - The Original Secret Society 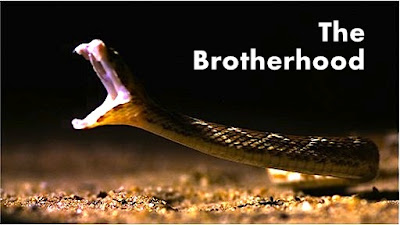 Like probably most of us I knew that the Chinese Year of the Snake kicked off on the 10th of February 2013. I wasn't too sure of the characteristics of this so went on Google to find out - but got side-tracked!

I came across instead The Brotherhood of the Snake - a very different kettle of fish. Some sort of secret society I read.

Remembering that I had an Encyclopedia of Secret Societies waiting to be consumed, or at least perused, I opened up the virgin book and there it was on Page 100 - The Brotherhood of the Snake.

It's not something I had heard of previously which is surprising as the encyclopedia states, "... writers ... claim to have detected that the Brotherhood of the Snake is behind every secret society in history." Now that's a mighty big claim.

The book goes on to say that this brotherhood is, "... the oldest secret society in the world, founded in prehistoric times to carry out a diabolic plot of world domination and enslavement, culminating in a New World Order in the very near future."

Ah, now the New World Order is familiar. George Bush Snr gave the idea a boost to conspiracy theorists with his speech of January 16, 1991 when he said:

"This is an historic moment...we have before us the opportunity to forge for ourselves and for future generations a new world order - a world where the rule of law, not the law of the jungle, governs the conduct of nations. When we are successful, and we will be, we have a real chance at this new world order, an order in which a credible United Nations can use its peacekeeping role to fulfil the promise and vision of the UN’s founders."

Winston Churchill, Woodrow Wilson and others had previously talked of a New World Order but back to the Brotherhood of the Snake. Though there is no documented proof of it's existence the order was seemingly taken over by evil forces in Mesopotamia in the year 300,000BC and all secret societies from the Illuminati to the Freemasons are simply branches or sections of this original brotherhood. At least that is the gist of what my encyclopedia claims.

The snake is symbolic of the Genesis' serpent of The Tree of Knowledge and points to the belief of Satanism i.e. the worship of Satan the fallen archangel and spirit of evil.

But who started this first secret society of the Brotherhood of the Snake? Here's a couple of versions I found:

"It all started thousands of years ago with the "Brotherhood of the Snake", a secret society set up by an alien named Ea or Enki. This story is very carefully told in the Sumerian scriptures, which go back at least 6000 years. There it says man was created by draconian aliens, who came to this planet to exploit its resources - especially gold. But the work was heavy, so the alien race wanted someone else to do the hard work. Thus Ea, who was a brilliant scientist, created homo sapiens as a hybrid between a primitive earth life-form and the alien race. Source.

"When we look to discover who founded the Brotherhood, Mesopotamian texts point right back to that rebellious God, Prince Ea. Ancient Mesopotamian tablets relate that Ea and his father, Anu, possessed profound ethical and spiritual knowledge. This was the same knowledge that was later symbolized as trees in the Biblical Adam and Eve story.

In fact, the Biblical tree symbol came from pre-Biblical Mesopotamian works, such as one showing a snake wrapped around the trunk of a tree, identical to later portrayals of the snake in Eden. From the tree in the Mesopotamian depiction hang two pieces of fruit. To the right of the tree is the half-moon symbol of Ea; to the left is the planet symbol of Anu. The drawing indicates that Ea and Anu were associated with the snake and its teachings. This connection is affirmed by other Mesopotamian texts which describe Anu’s palace in the 'heavens' as being guarded by a God of the Tree of Truth and a God of the Tree of Life." Source.

Okay, I think I'll leave it there. It's funny how once you start researching something it can set you off on a trail in a completely different direction - but the scenery remains familiar.

Other Posts:
The Magic Behind The Secret Lodges
The Kundalini Serpent Of Adam And Eve
UFOs And Visits From Reptilian Dinosaurs