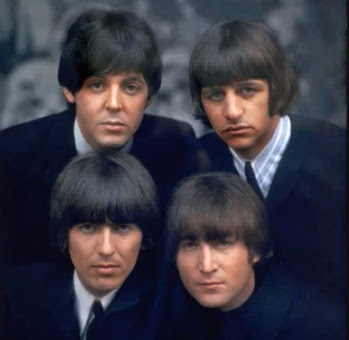 Paul McCartney's website recently launched a new feature called You Gave Me The Answer, where fans can ask him a question. The first one selected was a question from Luana in Brazil, who asked: "What would you do if you had a time machine?"

Paul's answer was: "Go back and spend time with my mum."

This reminded me of the story of how Paul said he wrote his song Let It Be. It was all because of his dead mother. Here are Paul's own words:


"I was exhausted! Some nights I’d go to bed and my head would just flop on the pillow; and when I’d wake up I’d have difficulty pulling it off, thinking, "Good job I woke up just then or I might have suffocated."

Then one night, somewhere between deep sleep and insomnia, I had the most comforting dream about my mother, who died when I was only 14.

She had been a nurse, my mum, and very hard working, because she wanted the best for us. We weren’t a well-off family - we didn’t have a car, we just about had a television – so both of my parents went out to work, and Mum contributed a good half to the family income.

At night when she came home, she would cook, so we didn’t have a lot of time with each other. But she was just a very comforting presence in my life. And when she died, one of the difficulties I had, as the years went by, was that I couldn’t recall her face so easily. That’s how it is for everyone, I think. As each day goes by, you just can’t bring their face into your mind, you have to use photographs and reminders like that.

So in this dream twelve years later, my mother appeared, and there was her face, completely clear, particularly her eyes, and she said to me very gently, very reassuringly: "Let it be."

It was lovely. I woke up with a great feeling. It was really like she had visited me at this very difficult point in my life and gave me this message: Be gentle, don’t fight things, just try and go with the flow and it will all work out.

So, being a musician, I went right over to the piano and started writing a song: "When I find myself in times of trouble, Mother Mary comes to me" ... Mary was my mother’s name ... "Speaking words of wisdom, let it be. There will be an answer, let it be." It didn’t take long. I wrote the main body of it in one go, and then the subsequent verses developed from there: "When all the broken-hearted people living in the world agree, there will be an answer, let it be."

I thought it was special, so I played it to the guys and around a lot of people, and later it also became the title of the album, because it had so much value to me, and because it just seemed definitive, those three little syllables. Plus, when something happens like that, as if by magic, I think it has a resonance that other people notice too.

Not very long after the dream, I got together with Linda, which was the saving of me. And it was as if my mum had sent her, you could say.

The song is also one of the first things Linda and I ever did together musically. We went over to Abbey Road Studios one day, where the recording sessions were in place. I lived nearby and often used to just drop in when I knew an engineer would be there and do little bits on my own. And I just thought, Oh it would be good to try harmony, and although Linda wasn’t a professional singer, I’d heard her sing around the house, and knew she could hold a note and sing that high.

So she tried it, and it worked and it stayed on the record. You can hear it to this day.

These days, the song has become almost like a hymn. We sang it at Linda’s memorial service. And after September 11 the radio played it a lot, which made it the obvious choice for me to sing when I did the benefit concert in New York City. Even before September 11th, people used to lean out of cars and trucks and say, "Yo, Paul, let it be."

So those words are really very special to me, because not only did my mum come to me in a dream and reassure me with them at a very difficult time in my life – and sure enough, things did get better after that – but also, in putting them into a song, and recording it with the Beatles, it became a comforting, healing statement for other people too."


Other 67 Not Out Stories
10 Ghost Story Posts
White Feathers Comfort The Bereaved
Ghostly Rye: The Most Haunted Town In England

Email ThisBlogThis!Share to TwitterShare to FacebookShare to Pinterest
Labels: Beatles, Ghosts and Dead People, Messages from the dead