It was a dark, dismal day but Karin and I wanted a walk. We were undecided as to where to go but headed to St.Dennis, a village well away from the normal Cornish tourist trail. I made the decision as the day before I had read 'by chance' that the two bells in the local church tower were dated 1167 and 1176. As regular readers will know 67 and 76 are important numbers for me.

The old church, St.Denys, stands high on a conical hill, over looking the village and Goss Moor. The church was originally built on the site of a fortified Iron Age settlement and this may have been how it got it's name. The Cornish word for a hill fort is 'dinas'. But, in saying that, the church was dedicated to St.Dionysius in 1327 and this could well have changed over the years to become Denys or maybe Dennis.

Whatever, the church itself has been in place since at least the 11th century and probably used for religious meetings well before this.

The legendary King Arthur may have walked these fields. The Magalithic Portal website quotes from the Chronicles of British Kings' by Geoffrey of Gloucester:

"King Arthur, king of the Britons took refuge in the South west from the Angles, a Turkonic (sic) race who invaded Britain during the 5th century. Demelihoc was a secondary fortress of Gorlios, King of Cornwall. We assume Dimelhoc was a dinas of dennis on which the church is built. During the fight with Arthur, Gorlios put his wife Igeme in his strongest fort, Castle an Dinas, and he commanded Demelihoc hoping that he would survive. He was slain and his wife captured. She afterwards married Uther of round table fame."

Going back into the St Denys Churchyard, along the main entrance path is an ancient Celtic Cross. The age is unknown but has crude markings of a Celtic Cross and an hour glass (Clepshydra) shaped design on the shaft.

One of the strange moments of our visit was that the church is normally closed during the week, yet when we arrived there was a man sweeping the paths and the church was open for us. Those 67 and 76 bells signified the right time to venture to St.Denys. 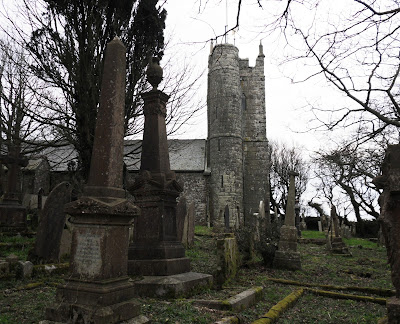 I'll have to go back to the St Dennis church on a sunny day to take some better photos. From the hill it's possible to see for miles into the distance. On a dark day it all looks kind of creepy.