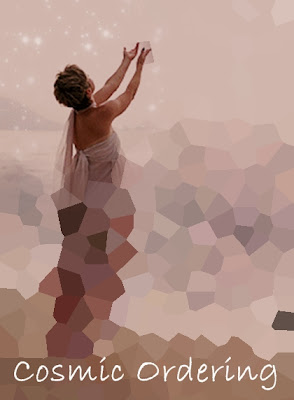 I recently published a post titled Place Your Cosmic Order For Whatever You Want. Today, when flitting through the Daily Mail newspaper, I saw an article about the UK television presenter Noel Edmonds and how he reckons Cosmic Ordering worked for him.

About seven years ago Edmonds lost his job with the BBC and was in the middle of a painful divorce - he had to sell his large home in Devon. But he claims to have overcome his problems with the help of Cosmic Ordering. He placed three main wishes (or cosmic orders): a home in the sun, a new career and a female companion to make him laugh and make him happy.

As Noel explained, "You have to pick yourself up and think: Right what's the next stage? What's the next chapter going to be? Some people stare at the moon and others the ocean. I wrote down the things I really wanted in life."

When he tried to tell friends and people in general about the idea of Cosmic Ordering the common reaction was mocking laughter with the assumption that he'd lost his marbles - but he has had the last laugh.

He waited, as you must, for the Cosmos to fulfil his order and, sure enough, his wishes came about.

Today he has a house in the South of France, as well as a Georgian home near Bristol, a presenting job for Channel 4's Deal or No Deal, which has resurrected his television career and, yes, he's also got a lovely wife called Liz who makes him laugh.

Noel tells of how he remembers the very minute Liz came into his life:

"It was October 6, 2006 at 11 am," he remembers. "Liz was a freelance make-up artist working for the department at Endemol. When she came into my dressing room, I knew she was there before I turned round. I don't know what you call it - positive energy or whatever. All I remember turning round and thinking, 'There you are at last. There you are.'"

Liz felt the same magic moment. "As soon as we met - you know, you see it in the movies and read about it - I can't explain it. When I look back it was a kind of madness, but the madness felt right."

The couple are now married.

Noel Edmonds' Cosmic Order is complete but he still carries the piece of paper in his wallet with his three wishes - a reminder perhaps of how magical life can be.


"Ask and it will be given to you; seek and you will find; knock and the door will be opened to you."

Other Similar Posts:
How To Get A Car Parking Space Using Coincidences
Place Your Cosmic Order For Whatever You Want
Visualisation Of The Mystic Masters