I mentioned a short while back that I was de-cluttering my office. It's not as easy as it seems, is it? Maybe it's just me, but I get sidetracked.

For example I picked up a book about Buddhism and, of course, opened it up and read: "Sitting under a pipal tree, in a forest near the village of Uruvela, Siddhartha deepened his analysis of reality," And this where he finally attained his Great Awakening.

"Ah," I remembered with a very minute awakening, "I just saw some pipal leaves in a fully packed, overflowing box I had looked into briefly."

So a detour to the box. I kept the pipal leaves (as in the pictures on this post) because of the link to Buddha. They are from India and came at a time when I used to publish magazines from home, including penfriend mags. I stopped doing this back in 1997, so shows how my office stuff has built up. 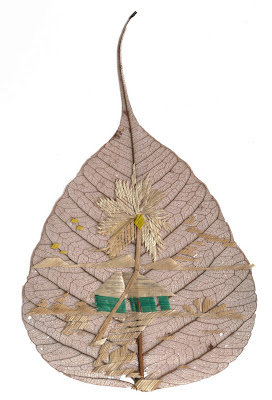 At the time I often exchanged my magazines for other items from countries where they had difficulties sending money to England. The pipal leaves were in lieu of payment. I received all sorts of strange things! Like the Egg Decapitator below - still in it's box! 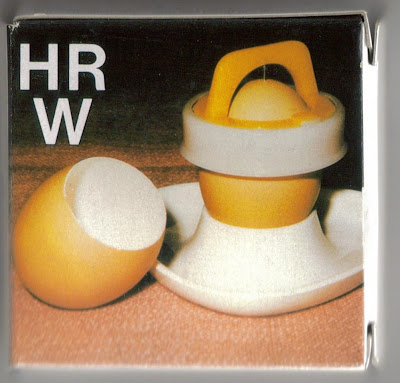 The pipal (peepal) tree is also called the Bodhi tree - bodhi meaning wisdom or enlightened. I read on Wikipedia though that: "Not all Ficus religiosa, the Latin name, can be called a 'Bodhi tree'. A 'Bodhi tree' must be able to trace its parent to another Bodhi tree and the line goes on until the first Bodhi tree under which the Lord Gautama Buddha gained enlightenment." So a real Family Tree. 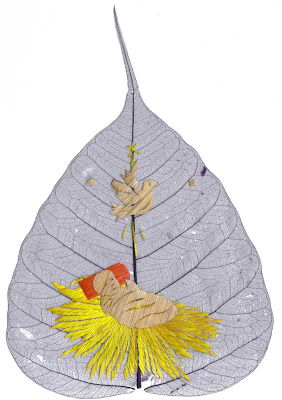 But getting back to my de-cluttering, I then came across a Christmas Card someone had also sent me from India - and on the front was a pipal leaf decorated with a hand painted Santa Claus. And above, on one of my other leaves, is what I take to be the baby Jesus. 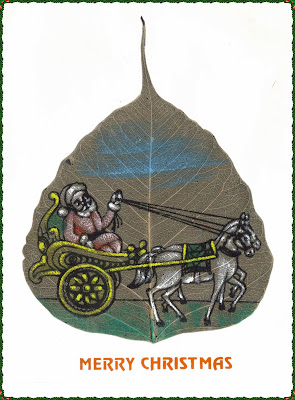 I think my de-cluttering is really more of a memory exercise. I'll probably hang on to most of my stuff. There might well be a day when I desperately need to decapitate an egg for instance and I'll have the tool for the job. I'll just tidy up a bit instead.

Recent Random Posts:
The Ghost Who Needed Help For Her Baby
Sunshine Brings Out The Magic Of Charlestown Cornwall
Top Ten Posts In May