Was This A Mothman Sighting? 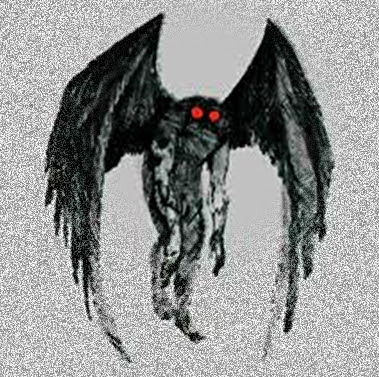 A strange paranormal story today via Shiela about a weird creature who was spotted by two friends. It's very similar to stories told of The Mothman on the Exploring The Unexplained website.


"I was walking in the woods near to where I live with my friend James. This is something we often do.

"We came to a clearing when we saw a dead animal, which we took to be a horse. It was in a terrible mutilated state with it's head almost severed from it's body. We went closer and saw that the animals eyes were gone and two of the legs had been torn off.

"It was upsetting to see this but we kept on with our walk. A few moments later I saw something move to one side of me but as I turned to look whatever it was had disappeared.

"After a few minutes I heard a shrieking noise but James didn't hear anything. I looked behind me where the noise was coming from and I saw the scariest creature I have ever seen or want to see again. It was very tall, maybe 10 feet tall and was completely black other than for two eyes which were red and very large.

"I know that this may appear unbelievable but the creature had two black wings like those of an angel. It said something I didn't understand which was like a different language and then flew away.

"I saw this as clearly as I could see James but he says he saw and heard nothing and that I must have watched too many vampire films. But I did see it and I was shaking with fear. All I wanted to do was to go home. I know I will never walk in the woods again."


Other Random Posts:
The Magic Of King Arthur And Tintagel Castle Cornwall - 21 Exclusive Photos
The Sixth Stage Of Dying Is The Afterlife
The Concentration Camp Romantic Coincidence