Hiawatha Meets Up With A Cornish Summer In February 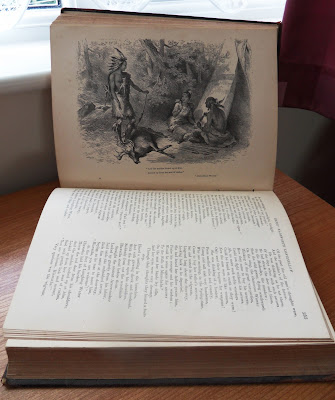 I had been looking at an ancient book, well over 100 years old, of the poems of Henry Wadsworth Longfellow and in particular the Song of Hiawatha.

This Hiawatha poem is very long and stretches from page 221 to 291 and reminds me of my mother. It was one of her favourite poems- so a few memories stirred. The book was originally hers.

That same evening Karin and I went to the cinema to see the newish movie Summer in February. It was her choice but I went along willingly as the film is set in Cornwall, where I live.

Against the backdrop of the Cornish coast, it tells the true story of a love triangle between the artist Alfred James Munnings, Florence Carter-Wood, and Gilbert Evans who was the land agent in charge of the Lamorna Valley estate where the Lamorna members of the Newlyn School lived and painted. It's probably best described as Munnings' bohemian period period.

And here's the synchro or coincidence. One of the early scenes in the movie is set at one of the Newlyn parties and AJ, as he is known, is discussing poetry. To prove the point he is making he starts to recite quite a chunk of Hiawatha by Longfellow.

Who would have thought that a film set in Cornwall would have any links to Hiawatha.

The final verse of Hiawatha


Thus departed Hiawatha,
Hiawatha the Beloved,
In the glory of the sunset,
In the purple mists of evening,
To the regions of the home-wind,
Of the Northwest-Wind, Keewaydin,
To the Islands of the Blessed,
To the Kingdom of Ponemah,
To the Land of the Hereafter!

Other 67 Not Out Posts:
A Chaffinch And Poems Exhumed From The Grave
An Ode To Coincidence Via The Lord of The Rings
The Wedding Poem Coincidence