Magical Walk With Daphne Du Maurier To The Gribbin 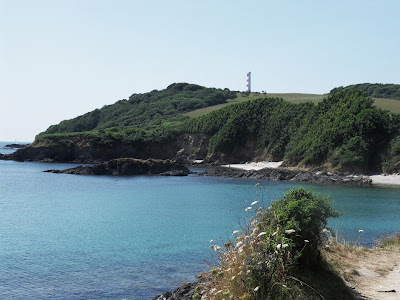 "And I thought of the tide, how swift it ran and strong into the little cove. The wind blew down from the headland like a funnel. I got the boat out into the bay. I got her out there beyond the beacon ..."
~ Quote from Rebecca by Daphne Du Maurier

Karin and I were walking in Du Maurier country again today and we decided to head for the beacon mentioned in Rebecca.

The headland mentioned by Du Maurier is Gribbin Head as shown in the photo above, with the beacon on the skyline.

We started our walk at Hambland and parked in a farmer's field - he only charges 50p, which visitors have to place in an honesty box.

We headed down a track between farming fields ... 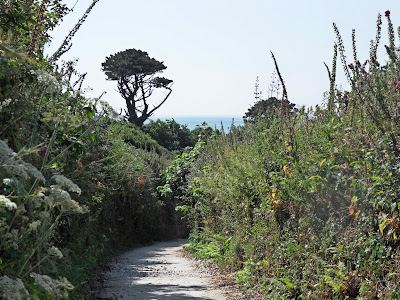 ... and soon spotted the beacon or tower on Gribbin Head through the hedgerow, to the right of the photo. 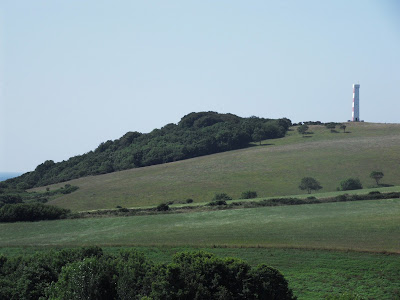 We walked down to the coast at Polridmouth, where one family were taking advantage of the sunshine. 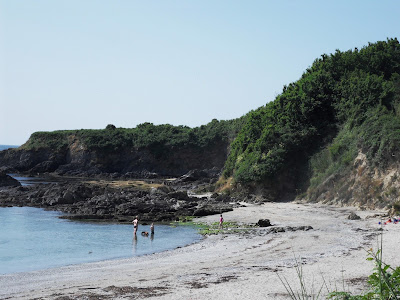 During the second world war Polridmouth was used as a decoy site. Lights were placed around the ornamental lake (below) to lure the enemy bombers away from Fowey harbour, particularly during the build-up to the D-Day invasions, when 2000 American troops were stationed in and around the town. 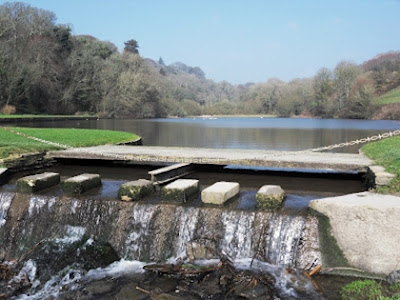 From here we took the South West Coast Path over a normally marshy area using a wooden walkway. 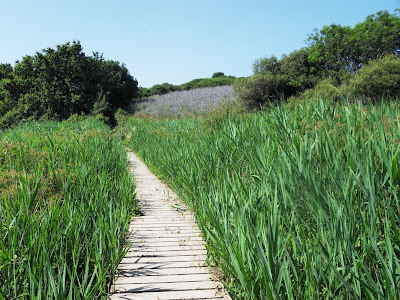 We were soon heading up the cliff side on a normal path ... 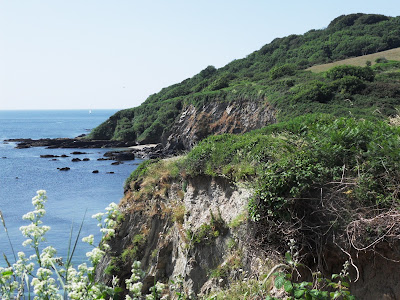 ... with the Gribbin Tower in view. 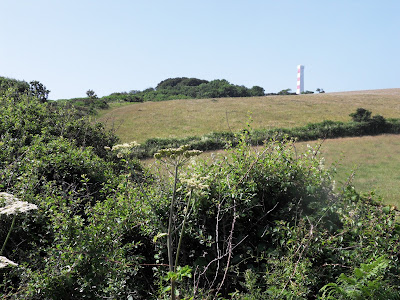 On the way we made a detour and scrambled down a narrow path to visit a small, stony beach where the water looked very inviting - and no one else in sight - perfect! 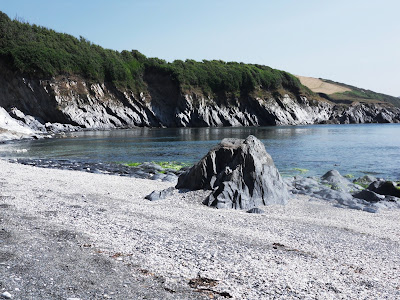 After a short break we headed on up the path towards the Beacon. 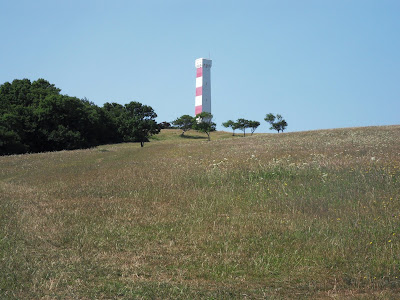 And finally we reached our destination: the beacon or tower on Gribbin Head. The area has quite a history dating back to the Iron Age. It's a perfect prominent viewpoint.

In Elizabethan times the Gribbin was a beacon site, which in 1588 helped carry the news to London of the approaching Spanish Armada. 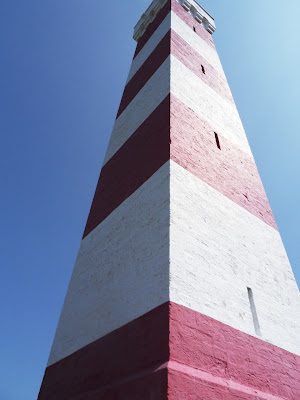 For us though the views returning from the beacon were the highlight of our walk. Though it was a sunny day there was a slight haze but it didn't spoil the scenery.

The River Fowey was in view as it made it's way inward from the sea - or perhaps vice versa! 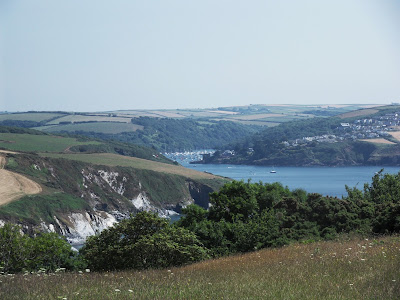 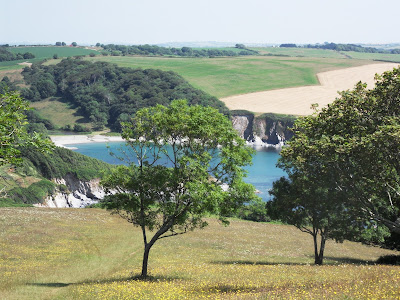 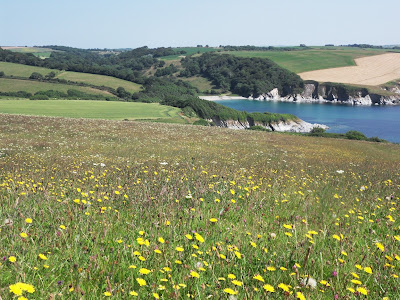 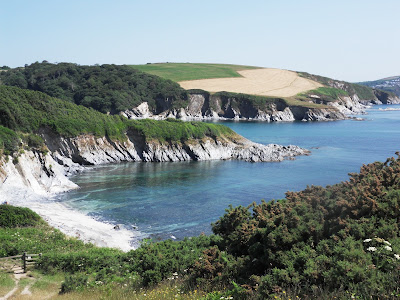 Once we were down to sea level again we sat on the rocks and had sandwiches and tea, that we had brought with us in our rucksacks. We looked at the sea. 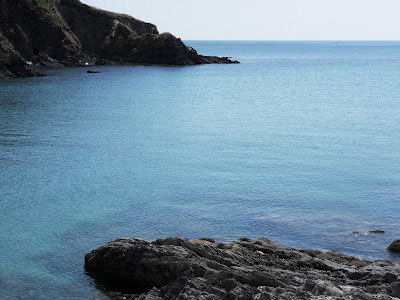 After spending some time on the coast we made our way back to the car and remembered to take a photo of the gatehouse or lodge to Mennabilly - or Manderley as Daphne Du Maurier called it in her book Rebecca. Unfortunately it's not possible to see the house itself. 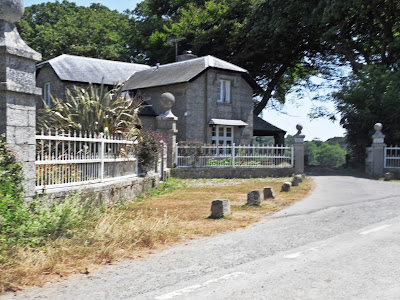 Rebecca described it thus: "The road curved before us, on the left, were two high gates beside a lodge, open wide to the long drive beyond. As I drove through I saw faces peering through the dark window of the lodge ..."


Du Maurier Country
The Gribbin is the setting, thinly disguised, for many Daphne Du Maurier novels and short stories. Much of the action of Rebecca takes place at Polridmouth, with its boathouse and shipwreck.

Menabilly is the inspiration for Manderley and also features in My Cousin Rachel and The King's General.

The Gribbin farmland is the location for the murderous avian attacks on The Birds. 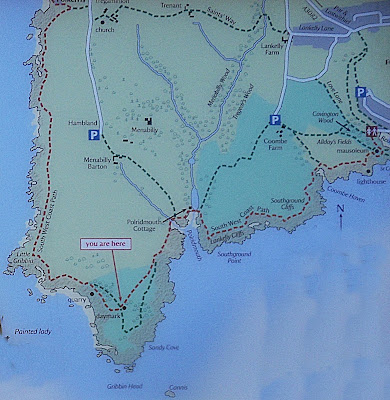