Recipe For Attracting $10,000 And In Doing So Also Avoiding Cyclones 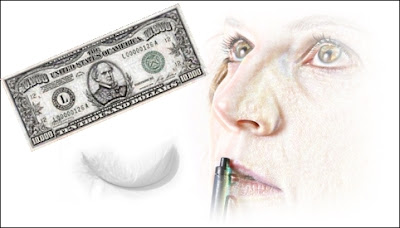 I realise that I'm often prattling on about white feathers - but, regardless, I'll start with them again today.

Last Saturday was my grandson's third birthday. He's very special to me and before we set off to see him I was idly wondering what my own parents would make of him. Sadly they both died before he was born.

This was going through my mind when Karin said (at long last!) that she was ready to go and see Samuel. We opened our front door, which leads to a porch and there on the door mat was a fluffy white feather. A coincidence, a lot of people will say. But for me it felt like a symbol from my parents.

We left the feather in place and set off to the birthday boy.

The next day, Sunday, my son and daughter-in-law were holding a party for Sammy in a local hall. I think he's got more friends than Karin and I have put together! As we left the white feather was still lying peacefully on the mat in the porch.

On returning home, with the festivities over, the white feather was gone.

Okay, now moving on. Yesterday Karin said how we hadn't seen or heard from a couple we know for ages and ages. Later in the day we were walking to town and there they were coming towards us. They said they had been thinking about us too and how we must get together soon.

There is a reason for these unrelated snippits.

Karin went to the shops for something and 'by chance' met an old dressmaking client of hers. She hadn't seen her for, maybe as much as six months. The woman said, words to the effect of, "How funny I should see you as I was going to phone you later today."

So three incidents and they have one thing in common. Yes they were - what shall we call it? Paranormal, synchronicity, telepathy? Well, it doesn't matter what it is, the point is that 'magical' things happen when we don't try too hard. A throw away thought, of no apparent strength can make things happen.

Sometimes in life we tend to put in too much effort, too intensely, to make something happen. When really we need to take the more relaxed approach.

One of the first occult books that really meant something to me was The History and Power of Mind by Richard Ingalese, written in about 1902. It's somewhat dated now but the author in one of the chapters mentions the Law of Opulence and how we can attract wealth and money. One of his rules for success was not to visualise the things we wish for too forcefully. He even says to do so is dangerous, and he gives and example of this:


"There was a student of Occultism ... who had met several misfortunes. Disasters followed each other till everything he had on the material plane was swept away. But he possessed a great deal of force, and knowing how to make demands for what he wanted he commenced to make new creations.

"He demanded ten thousand dollars, which to him was financial opulence. The demand was not met immediately, and the young man became impatient and finally angry. When he wakened one morning to find himself without money to pay for his breakfast, he walked to the park, threw himself on the ground, and lay there for several hours with his teeth set, hands clenched and with perspiration standing out all over his body, so intense was his excitement while making his demand for the money he had pictured.

"The next day he managed to board a freight train and, after the usual delays and inconveniences upon transport of that kind, the student of Occultism managed to reach a Western town. But he had no sooner entered the place than a cyclone came along and swept it off the face of the earth.

"When the young man of the violent demands came to consciousness he was lying on the ground some distance from the place where he was at the last moment of his recollections. His body was a mass of bruises, and when he tried to rise to his feet he found one leg broken. Bodies of dead animals and men lay all around him, and wagon loads of debris were strewn in all directions; but just within reach of his arm lay a plethoric wallet.

"The young man reached his best arm out and got the wallet and immediately examined the contents. There were just ten one-thousand-dollar bills in it and not a scrap of paper or a card to tell whom it belonged. ...

Please do not understand me to say that the young Occult student's violent demand created the cyclone, because he had nothing to do with the creation. But the student was drawn into the cyclone, and suffered the horrors of it, because of his own tempestuous mental condition when making the demand, which had to be met after the manner it was made."

Ingalese's example is way removed from my original stories at the beginning of the post but the message is similar. We don't have to try too hard to create creations of any kind - relaxed, sometimes does the trick without us even realising it.

Of course, if we want to create $10,000 we have to put in some effort but only in making an accurate mental image of what we are demanding. And it's probably just as well to throw in a good dash of belief as well.