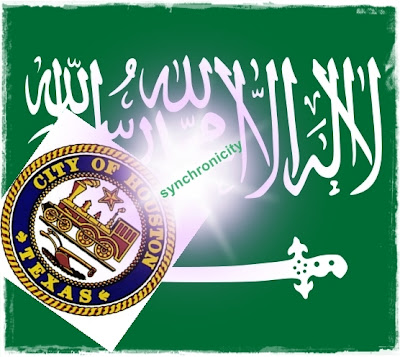 Today's remarkable coincidence or synchronicity story is from Shane Davidson. This is what he has to say:


"I had an incredible thing happen ...

"On a Saturday morning, my fiancé received a phone call to inform her that her cousin's adopted son (a United States Marine) had committed suicide. She was obviously distraught. As I was sympathetic, and I had yet to meet that side of her family, I enquired as to the details of the situation.

"She explained that her cousin had adopted the son Zack along with his little sister Zoey from the foster care system here in Houston, Texas. In passing she mentioned their father was a Saudi national that had died of a brain tumour.

"A light went on in my head, recalling a time, some 23 years prior, while living in Saudi Arabia, when my parents took care of a little boy and girl while my father's boss travelled to Houston to be treated for his brain tumour.

"I remembered the little girl because she was a toddler with eye glasses at the time (late 1970's). I could not resist asking my fiancé if she knew the name of the father. I was shocked (but not entirely surprised) to find out the last name was the same as my father's boss. I immediately called my father to ask if he knew the names of those little children. As it turned out, it WAS the same little boy.

"I had met my fiancé through a strange series of events after feeling VERY strong compulsions to frequent a place I would normally NEVER go. Upon realizing what had happened, the family asked me to be a pall bearer at Zack's funeral and Zoey came to visit my parents.

"I cannot describe the feeling that overcame me when I realized what had just taken place (and that we might have never realized if I hadn't been inquisitive that day). I have had many strange "coincidences" such as this in my life and have always wondered if there was some sort of message behind them. this one was very personal, as the young man had been on drugs and was quite troubled by something - such a pity.