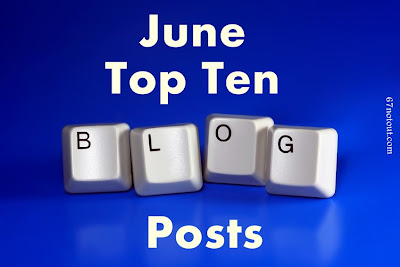 The following are the Top Ten most viewed posts on 67 Not Out for June, with more ghostly tales than usual and an old favourite in the top spot that has now had well over 280,000 hits.

1. Photo Taken Of Father Showed His Missing Daughter
Michael Dick hadn't seen his daughter, Lisa, for over 10 years. This was since he had separated from his first wife. Determined to make contact with her again Michael travelled to Sudbury, where she was last known to be living, together with his two other daughters ... Read full story.

2. The White Dove As A Messenger Of The Dead
One day I came home from work and a white dove was perched on the steps that lead up to the front door of my house. No doves or birds of any kind were ever previously on my steps. This white dove would not move to let me ... Read full story.

3. The Concentration Camp Romantic Coincidence
A young man, Antonin Nowak, just 14 years of age was in a concentration camp in Poland, one of the many injustices of World War II. Through the high fence he often saw a young girl of a similar age and ... Read full story.

4. The Photo Of The Ghost Of Broomfield Cottage Tawstock
While at the cottage - even though it dates back to the 15th century - I always felt comfortable. It had a good vibe - for want of a better description. One night, however, Karin had gone up to bed and I was sitting on a settee looking out at the living room. For some reason I felt I should ... Read full story.

5. The Red Balloon Coincidence
It seemed the obvious thing to do for a 10 year old. Laura Buxton was at her grandparent's golden wedding anniversary and there was a helium filled balloon going spare. So she wrote on a label her address with the message 'Please return ... Read full story.

6. Ghostly Rye: The Most Haunted Town In England
One of the most atmospheric and ghostly places I have visited is the town of Rye on England's south coast. Some claim it is the most haunted place in the UK and on a visit it's possible to see why this is. Last year my wife and I were staying in a 15th century cottage in Rye, right in ... Read full story.

7. The Ghost Who Chased A Thief
A few years back, before I lived with my partner, I was living at home with my parents for the summer after University. They were going away on holiday and left me with the responsibility of looking after the house. I didn't mind being alone but I asked a girlfriend to ... Read full story.

8. 10 Stories About Reincarnation
I've published a few post recently combining 10 stories on a particular theme, such as: coincidences, ghosts, UFOs, Cornwall and so on. As they seem to be quite popular another set of ten today, this time stories about reincarnation ... Read full story.

9. The Reincarnation Of The Cathars Priest Roger de Grisolles
Guirdham's belief in reincarnation started following his seeing a patient, who was referred to him because of possible epilepsy. She had been having strange nightmares, since a teenager, where she felt that she was ... Read full story.

10. The Hidden Alien World Of The Demodex Folliculorum
We search the universe for mystery and mysterious alien life and yet some are with most of us always. One example is the demodex folliculorum. In the small picture the tails of these alien like creatures can be seen in a green colour protruding from the red ... Read full story.