Her Dead Aunt Contacted Her With Gold Cigarettes 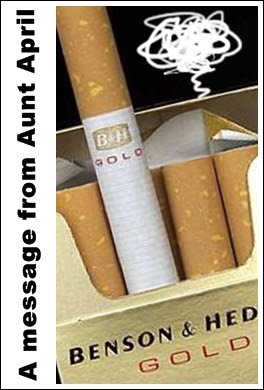 This is different - a different way for a deceased aunt to contact her relative. The story is by Hannah H from Norwich, England.


"I'm not sure if you will believe this but it's perfectly true. I thought you might like to hear about it as I have read some of your posts about White Feathers as messages from the dead.

"My Aunt April died two weeks ago. I was close to her because as a child my parents split up and she would often look after me. I also stayed with her for about eighteen months as a teenager when my mother first remarried.

"The only problem with Aunt April was that she smoked. I didn't like it but she would never give it up. She coughed a lot, had a wheezy chest but still smoked. That was her, a smoker.

"She died on a Tuesday and I heard about it straight away. I was upset, but she hadn't been well for several months. I hoped she died peacefully.

"On the Wednesday evening my land line phone rang. I went to answer it, but there was no one there. As I went to place the receive back I saw that there was a cigarette by the phone. I picked it up and saw it was a Benson & Hedges Gold, the brand Aunt April always smoked. I dialled 1471 but there wasn't a number for the caller.

"I don't know how the cigarette got there. Aunt April hadn't been to my flat for over four months and no one else smokes where I live.

"On the Thursday I went into work and on my desk was a full packet of Benson & Hedges cigarettes. There's only three other people in my office, all non smokers, and they all said they didn't know where they had come from.

"It's possible a cleaner could have left them but I feel it was a sign from Aunt April that she was still about. Cigarettes were her trade mark. If the deceased can leave white feathers then why not cigarettes."

Email ThisBlogThis!Share to TwitterShare to FacebookShare to Pinterest
Labels: Messages from the dead, White Feathers