Did The Old Testament Bible Copy From The Epic Of Gilgamesh? 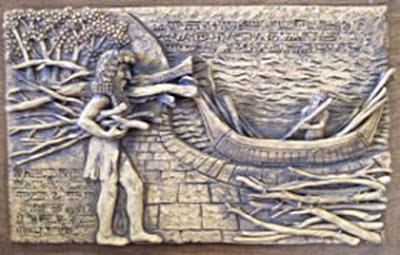 The Epic of Gilgamesh is said to date back to the 18th Century BC and contains several parallels with the Bible. Some would say it is from this, that parts of the Old Testament was based. Let's look the story of Noah's flood for example.

In the Epic of Gligamesh mankind is returned to clay by the Gods - except for the hero Utnapishtim. He is told to build an ark, by Ea the god of wisdom, where each side measures 120 cubits, and for it to be sealed with pitch and bitumen. When built Utnapishtim, with his family and 'all the animals of the field' board the ark. The Earth is then deluged in seven days.

The ark drifts to Mount Nisir (today this is in Iraqi Kurdistan) and lodges on the mountain. Utnapishtim releases a dove, a swallow and a raven. When the raven fails to return, the ark is opened and the inhabitants are free to walk the Earth again - as for the rest of the population 'all the human beings (are) turned to clay'.

This is surely too similar to Genesis to be a coincidence. 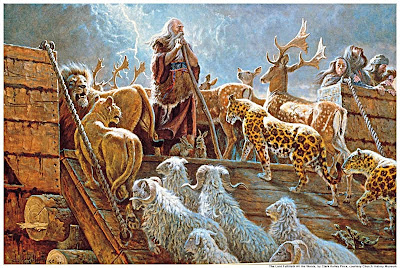 Genesis 6:14. 'Make thee an ark of gopher wood ... and shalt pitch it within and without with pitch.' And in verse 15 God gives the measurements for the ark.

Genesis 6:19 'And of every living thing of all flesh, two of every sort shalt thou bring onto the ark, to keep them alive with thee ...'

Genesis 8:4 Following the flood. 'And the ark rested ... upon the mountains of Arafat'.

Also in the Noah story he releases a dove and a raven.

But there are also other similar flood stories.

In Hindu texts, from the 8th century BC for example. Vishnu warns the first-created Manu and his wife, Sraddha, that he intends to destroy all wicked people, animals and plants with a flood. Manu is saved by building - yes, an ark.

In Greek mythology Zeus is offended by the cannibalism of the Pelasgian people and floods the Earth to wipe out mankind but ... Deucalion is given advance warning, so he builds an ark for himself and his wife Pyrrha - and the ark comes to rest on Mount Parnassus.

The Biblical story of Noah is also in the Koran, where he is considered a prophet. This time the ark ends up at Mount Judi.

All of these have the same theme: God punishes the wicked but a virtuous man and his family are saved by building an ark which, after the flood, comes to rest on a mountain.

It's up to us what we believe, but my old family Bible gives the date of the Noah flood as 2448 BC - whereas the Epic of Gilgamesh is dated the 18th Century BC.

Other Similar Themed Posts:
The Creation Of Many Adam And Eves
Was Jesus A Vegan
Bible Coincidences Where God Is At The Centre