The Port Of Christ And The Old Tower On The Cliffs

When we visited Porto Cristo - 'The Port of Christ' - while in Mallorca we also made our way to a viewpoint high on the cliifs overlooking the town's natural harbour entrance. On this we discovered there was a tower - a very old tower - and there were similarities with this to the Gribbin Head tower in Cornwall I have previously written about.

But first, how Porto Cristo got it's name. It was once a small fishing village and legend has it that it was named Port of Christ after a boat, with a crucifix on board, was washed up on the beach, at the time of the Christian invasion. Though nothing is certain with this sort of thing. Another version is that an oxen, carrying an icon of God, stopped at the village and refused to go any further. The locals interpreted this as a sign that Christ wanted to be here.

Now for that tower, constructed in 1577. It was initially used for fire beacons to communicate between the tower of Port Colom and the tower of Puig de Massot in Cape Vermell. This is similar to the Gribbin in Cornwall - also a  beacon site which in 1588 helped carry the news to London of an approaching Spanish Armada 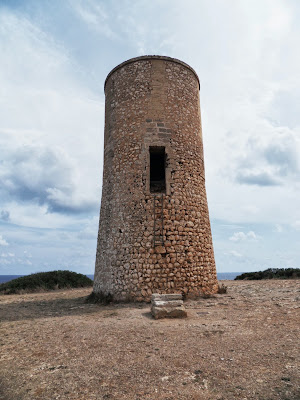 The way we now communicate has certainly changed! 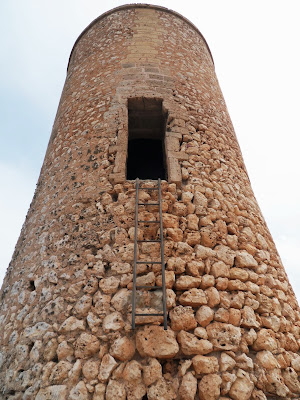 And from the tower a lighthouse can be seen - wearing Newcastle United colours (for UK football fans). 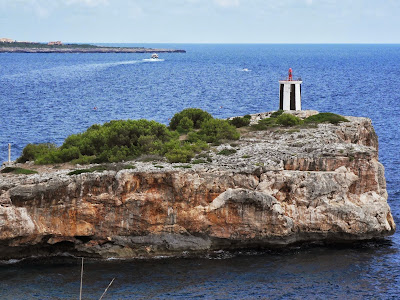 And that's it from Mallorca (probably!)

Other Mallorca Posts:
We Stumble On A 3000 Year Old Settlement At S'Illot Mallorca
The 1696 Mallorcan Castle Also Used In The Spanish Civil War
The Power Of Synchronicity In Mallorca
A Travel Blackout To Cure And Improve Our Tomorrows