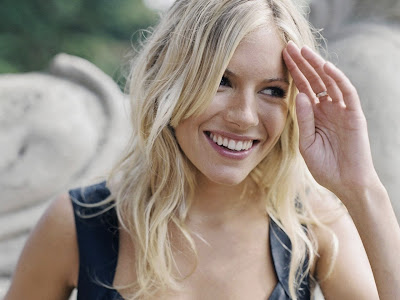 I was interested to hear of Sienna Miller's superstitions. This is what she said:

"I have to sleep on the left side of the bed - I just have to, and if I don't it feels weird." Okay, and to think all of these years I've thought it odd that I prefer to sleep on the right! But moving on Sienna has a more interesting superstition.

"When I get onto a plane I have to kiss my hand three times and tap the plane three times. If I didn't do that, and the plane went down I'd know it was my fault. My father actually grabbed my hand once and refused to let me do it to prove a point, and we went through the worst turbulence that either of us has ever experienced, and I looked at him and thought, 'See, I knew this would happen.'"

As for coincidences Sienna once produced a prize winning rabbit by coincidence - when she was a child.

"I went to boarding school when I was eight, which is quite young, so you were allowed to take a pet with you as company. I took my pet rabbit, and another girl, Ali, had a rabbit too. Well, they got on and I wondered what would happen if I put them together, and they ended up mating. I bred, quite by coincidence, five bunnies, one of whom went on to be a prize-winner"

And to end with a weird dream she had recently:

"I was in a field and I was running towards an enormous black and red jumper - it must have been 50ft wide. I then looked round and there were tons of other people running after this same jumper, all desperate to get hold of it. I couldn't figure out why, but then I remembered - in the dream - that it was Dennis the Menace Day. As soon as I thought that, the dream cut - like in a film - to me on ballet pointe shoes, water-skiing on a lake. I woke up laughing my head off."

That's some of her quirks. Sienna Miller is currently an ambassador for the BMW i3.

Other Celebrity Posts:
The Coincidences Of The 27 Club
The Ghost Or Spirit That Changed Fern Britton's Life
JK Rowling And Harry Potter Birthday Coincidence