A Jackalope - A Rabbit With Antlers - Seen In Bodmin Jail 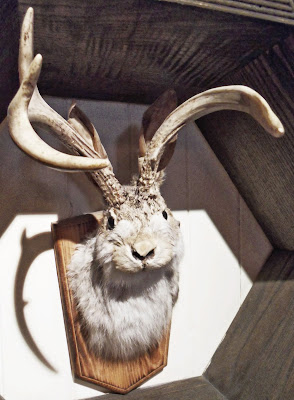 Yesterday's post was about Bodmin Jail and while there we saw the above example of taxidermy - a rabbit with antlers!

Such a creature is sometimes referred to as a jackalope in North American folklore. Wikipedia states:


"It is possible that the tales of jackalopes were inspired by sightings of rabbits infected with the Shope papilloma virus, which causes the growth of horn- and antler-like tumors in various places on the rabbit's head and body."

There is an example of Shope papilloma in a Daily Mail article, with photos, which tells of a "bunny filmed hopping around Minnesota yard with rare infection that makes rabbits grow horns."

And, of course, there happens to be an over the top video, which I find a little disturbing, about such a rabbit:

That's the thing about Cornwall, so many myths and legends.

But the USA has it's own and I read this about jackalopes on Legends of America: 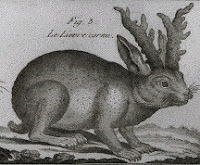 "Most commonly sighted in the states of Wyoming, Colorado, Nebraska, and New Mexico, the jackalope also appears to have a European cousin, in Germany, known as the wolperdinger, and in Sweden, a related species called the skvader.

Illustrations of horned hares go back as far as the 16th century in scholarly European works."

Laura Neocleous, however, from the Wimbledon College of Art, has a somewhat different interpretation of a jackalope:

Believe as you will!