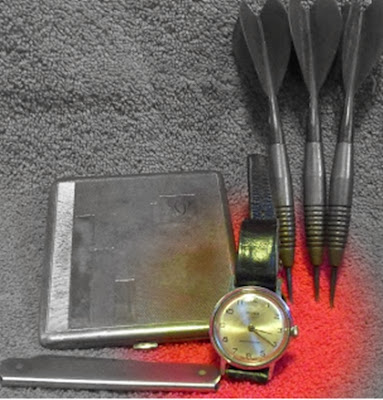 I have published many posts about white feathers and white doves and how these may, at times, be thought of as messages or signs from the dead.

On one of the posts a reader left a comment telling how a loved one had died recently but she hadn't seen any white feathers - and how she was hoping she would soon.

I'd like to clarify that not everyone sees white feathers or doves. Messages or signs can come in many different forms, often unique to an individual. I have previously given an example of when my own dad died:


"My son had just told us that he had qualified as a Chartered Accountant, which takes quite a few years work here in the UK. I was, of course, chuffed to bits about this and, after talking about it with my wife, I went upstairs to our bedroom.

I wanted to get something or other out of my wardrobe and, for some reason, I was wondering what my father, now deceased, would have thought about my son's success. As I reached into the wardrobe a small bag fell out.

The bag just happened to be one in which I kept a few of my dad's possessions. Nothing of value but they all mean something to me: his old watch, cigarette case, penknife, wedding ring, darts, a tie and a few other trinkets, all full of memories.

I then looked at the watch. Dad was always one for punctuality and often asked, "Do you know what time it is?" when I was a teenager either arriving home at night or getting up late in the morning. Then I noticed the time where the hands of the watch had stopped and have remained ever since.

The time on the watch was exactly the time that my son had been born (3.20 pm).

Perhaps I was in an emotional state but this really hit me. It was as if it was a message from my father saying he knew all about his grandson." Source.

I wasn't aware of seeing any white feathers or doves after my dad's death. I first noticed them following the death of my mother and then two other very close people in my life.

There are a myriad of  ways the deceased could contact us. I think we experience a gut instinct of what is real to us personally when we receive some sort of message. It's hard to describe, but it feels right - a moment of knowing perhaps.

What follows are links that show various ways people claim to have received messages or signs from those who have passed over.

The Unusual Contact With Her Dead Mother
In this instance her mother made contact with strands of wool.

His Dead Son Visited Him As A Butterfly
Actor believes his son came to him as a butterfly.

Precognition From Beyond The Grave
This looks to be a case of precognition.

Death Is Freedom And All Is Well
This was something I found after my own mother's death, which seemed like a message to me.

Dreams As Calling Cards From Her Dead Father
Perhaps we see our loved ones in dreams.

A Present Received From Beyond The Grave
In this post the family receive a gift.

A-Mail Messages From Beyond The Grave
A sports journalist receives what he calls 'A-Mail' from his deceased wife.

Dead Grandmother Gives Her Sherbet Lemon Sweets
In this case it's lemon sweets.

The Ghost Of Her Grandpa Rescued Her And Then Said A Final Goodbye
Sometimes we may see those who have died.

Her Boyfriend's Ghost Interferes With Her Love Life
In this case her boyfriend returns as a ghost.

The Ghost Of Her Grandmother Visits To Give Her Advice
And sometimes the dead even give advice!

The Dead And The Dying Are Trying To Contact Us
In this instance her dead mother appeared to be stroking her hair.

A Message From Her Dead Mother
Her young daughter sees her dead nanny.

Ghostly Footsteps On The Stairs
Some will say they hear those who have passed over.

Her Husband Chimed The Clock From Beyond The Grave
The title says it all.

Her Grandmother Visits Her From Beyond The Grave
Her grandmother visits via her bedside lamp.

I'd better stop there at twenty examples. I realise some readers may not believe all of the stories in the posts listed. Some will say we are fooling ourselves when we think we have received some sort of message or sign  from the dead. That's okay, it's up to us to decide what we want to believe.

I personally have no doubt that we live on.

It's also interesting how those who are dying themselves sometimes appear to see their loved ones who have died. There's an example of this on The Dying Can Speak To Those Who Have Died