Only Good Things Come In Threes 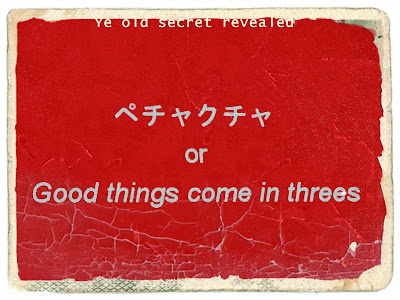 I have mentioned in posts, several times, how my wife is always finding coins. This is strange in itself but when she finds two closely together then I 'know' she'll find a third. We always say, on finding two coins, "Bound to now find a third."

We did it this week. I actually found the first coin (for a change). When I went to return our supermarket trolley, for which there is a £1 deposit. The previous user had left their coin behind. As I had no idea who the user before me was I kept the coin.

We then moved on to the Post Office to buy some postage stamps. Strangely there was no one else about but there was a 20 pence coin on the floor. So Karin picked it up, "Bound to find a third," she said.

Our next stop was to buy a newspaper. They have self service machines where you scan the goods yourself. In the return-coins tray was another £1 coin - nobody else about, so that became ours too. Mission accomplished!

Moving on about thinking in threes.

I've been reading Rob & Trish's book The Synchronicity Highway (and very good it is too). I've only got up to reading to page 49 but, as I sometimes do with books, I flicked through the pages quickly before I started reading to see if anything caught to my attention. It did.

I found that Trish and Rob have mentioned my synchro experiences three times in the book - and there's a strange thing about the pages they are on.

The first in on page 7, so when looking at the book pages 6 and 7 are open (67 being one of the important numbers in my life).

Now some will say things like this only happen because we are looking for patterns within our lives, but surely there is more to it than this. Otherwise why would so many of us say things happen in threes.

Are these threes perhaps pre-programmed as an attention seeking novelty item by the 'Universe'? A bit too fanciful for you? Okay, maybe we create the third with our belief that there will be a third.

I'll quickly add a little here that my own thought is that only good things happen in threes. I'll have nothing to do with thoughts that bad things may happen in threes, as some people seem to believe. What we think or say can become a reality, so best to think positive! I guess this must, therefore, mean I believe a third 'whatever' comes about because of what I/we believe.

When you think about it the number three is deep within us, right from children with stories such as The Three Little Pigs, Goldilocks and the Three Bears, and The Three Billy Goats Gruff. Rumpelstiltskin spins thrice for the heroine and lets her guess his name thrice over a period of three days, Snow White receives three visits from her wicked stepmother. In Charles Dickens's A Christmas Carol, Marley's Ghost tells Ebenezer Scrooge he will receive visits from three spirits. There's the Trinity in the Bible and so on and so on.

But, whatever, if two good things come along there's bound to be a third.