Finding Money By Walking Into The Magic 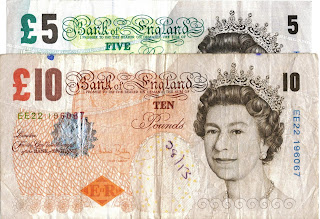 The following is true.

I wrote a post a short while back called Pennies Falling From Heaven where my wife heard a penny drop into a small dish in our bedroom. It has happened again, but a little differently. This time the previous penny was still in the dish but clinked as if falling into the dish.

When Karin told me she said it meant we would be coming into money. As I've written previously she is always finding coins when we go for a walk. I didn't argue with her but suggested she found something bigger than pennies in future.

Today we walked to our local town centre and went our separated ways for a short while. There was a busker singing and playing the guitar so, remembering Trish & Rob's post about how someone gave out lucky pennies, I dropped a 50p coin (about 70c) into his hat.

When I met up with Karin again there was a man collecting for Muscular Dystrophy so I put a £1 coin into his collecting tin.

We walked along a little further and Karin bent down to pick something up. "You would have walked right past it, wouldn't you?" she said.

Okay, so is there anything to this?

Was the coin clinking in the dish a sign that Karin would find the money? Or was it like seed money - I'd given away £1.50 so we got a ten fold return i.e £15. Or maybe it came from Karin's belief that she would find some money? Some will, no doubt, say that it was simply a 'coincidence'.

Of course, finding money means that presumably someone has lost some money, which isn't a pleasant thought, but some things might just meant to be.