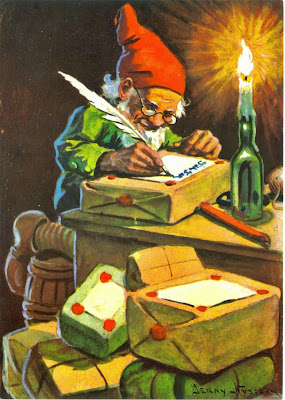 A postcard I received through the post had an elf on the front (above) - at least that's what I believe the little chap to be. Perhaps he's one of Santa's little helpers. Whatever.

We went for a walk - that's me and Karin not me and the elf - and spoke to someone who was delighted to tell us his small son was to be an elf in his school Christmas play. So that was two elves. 'Bound to be a third,' I thought.

Coming back from our walk I stopped to buy a newspaper.

Flicking through the pages at home I glanced at a regular columnist's page. Richard Littlejohn has always got a bee in his bonnet about something, especially elf'n'safety - ah, my third elf!

What Littlejohn means by elf'n'safety is all of the daft health and safety laws we now have in the UK. It really has gone a bit bonkers.

He mentioned one case where, at the annual Uckfield Easter Parade, the man portraying Jesus was forced to wear a high visibility jacket. One of those luminous orange things. Mad, but the logic probably was that as 'Jesus' was walking along the road he had to be seen and therefore had to be covered with a hi-viz jacket. We wouldn't want Jesus to get hurt, would we.

In his column Littlejohn went on to rant about another example of elf'n'safety: He wrote:


"Never bet against the ingenuity of elf'n'safety. The girl playing Mary in a Nativity play in Neath, south Wales, will have to wear a crash helmet in case she falls off her donkey.

Crazy. He goes on with his rant saying:


"No doubt the three Wise Man will all have to wear Hurt Locker-style protective suits, breathing apparatus and gloves to comply with regulations for handling gold, incense and myrrh.

Perhaps the donkey too, will have to wear a helmet and hi-viz jacket, just like the donkeys on Scarborough beach.

Don't be surprised either, if halfway through the baby Jesus is taken away by social services.

Your comfort and joy is our priority."

That's the thing with anything to do with elves, they are ambivalent towards us humans and are capable of either helping or hindering us - pretty much like elf'n'safety. What do elves learn in school?
The Elf-abet!

Where do you find elves?
Depends where you left them!

Wasn't Alf a half-elf too?

What is the difference between an elf and a chicken?
Feathers

What do you call a rich elf?
Welfy

Which elf was the best singer?
Elfis Presley.

Why did Santa’s helper see the doctor?
Because he had low elf esteem!

Other Not Too Serious Posts:
How To Bring A Dead Fly Back To Life
Brown Willy, The Hill Of Swallows And It's Holy Energy
Ghosts And Spiritual Entities Must Now Pay To Use London Transport