Brown Willy, The Hill Of Swallows And It's Holy Energy 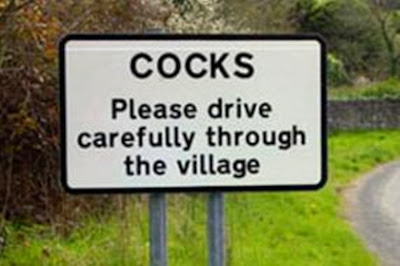 This is a road sign in Cornwall for the hamlet of Cocks which is in the parish of Perranzabuloe. Always raises a, erm, smile. Mind you the highest point in Cornwall is Brown Willy, part of Bodmin Moor.

According to The Aetherius Society Brown Willy is considered sacred. They believe that the hill is charged with 'holy energy' and November 23rd each year is said to be a 'Charging Day' when members gather to celebrate the sun's alignment with 'positive and negative rocks'.

The name of Brown Willy is from the Cornish language Bronn Wennili, meaning 'hill of swallows' - I'll leave you to make up your own jokes about that.

Some people have tried to change the name of Brown Willy to the Cornish version but this has been spurned. Even the respectable Daily Telegraph newspaper wanted the name retained and ran a headline 'Hands Off Brown Willy.' Part of their reasoning was: