Here's a bit of a coincidence. Ronnie Biggs, one of the Great Train Robbery gang died yesterday (18th of December). And what do the BBC 1 have on television the very same evening? A new drama called The Great Train Robbery! This wasn't because Biggs had died, the drama was scheduled ages ago. 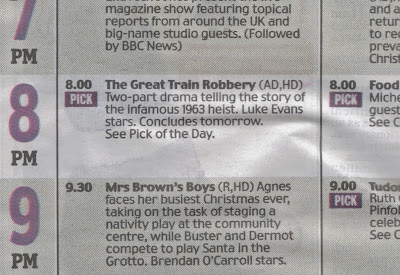 As for Biggs himself he became something of an anti-hero. He was captured and sentenced to 30 years in prison. He served just 15 months before escaping from Wandsworth Prison by scaling a 30ft wall and jumping into a waiting furniture van. He was then on the run. To quote Wikipedia:

"He fled to Paris, where he acquired new identity papers and underwent plastic surgery. In 1970, he quietly moved to Adelaide, Australia, where he worked as a builder and lived a relatively normal life. He was tipped off by persons unknown and moved to Melbourne, later escaping to Rio de Janeiro, Brazil, after police discovered his Melbourne address.

"Biggs could not be extradited because there was no extradition treaty between Britain and Brazil. Additionally, he became father to a Brazilian son, which afforded him legal immunity since the father of a Brazilian minor [photo at top of post] cannot be extradited from Brazil. As a result, he lived openly in Rio for many years, safe from the British authorities."

After his freedom and Rio good times Biggs, when aged 71, was forced to return to Britain as he needed expensive medical treatment. But he did this in style in a private jet funded by the Sun newspaper. The plane was greeted by over 100 police!

Biggs never regreted being part of the Great Train Robbery. In 2009 he said, "I am proud to have been one of them [train robbers]. I am equally happy to be described as the Teaboy or The Brain."