Destiny Or Fate? Amazing Coincidence Indicates They Were Meant To Meet 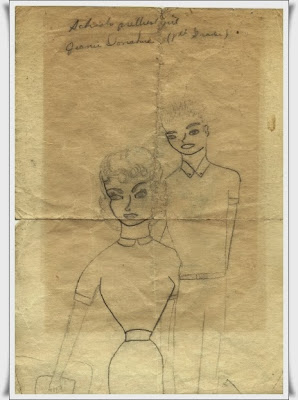 Here's a quite amazing coincidence story from Jean Donahue. To me it's an example of how there are certain people in our lives that we are meant to meet, when the time is right. Some would call this fate or destiny


"My name is Jean Donahue. My best friend's name is Sue.

Sue and I met for the first time in 1980. She is six years older than me. We grew up in different towns with no friends or relatives in common.

Sue is an artist. She's enjoyed drawing since she was a young girl. When she was a teenager she enjoyed drawing little cartoons about school life. She had some favourite characters she would draw and make up little stories about them.

Sue's mother had kept a scrapbook of some of those drawings Sue had made over the years. Shortly after we met, Sue was at her mother's house and was going through that scrapbook. She came across one of those drawings [at top of post] that said, "Schools prettiest girl, Jeanie Donahue 8th grade." She was taken aback and told her mother, "That's strange, I just met a woman named Jean Donahue."

Over the 30+ years that I've know her, Sue has often shown instances of foresight that is sometimes very eerie, even to herself. To this day, Sue insists that she knew nobody by the name of Donahue as on her drawing, she made the name up."

Jean also told me about the sad time her husband died and how Sue was there for her. Who knows, for sure, but maybe this was why they were destined to meet.

On the day Jean's husband died, Sue saw him running errands in town. Sue has since told Jean that her husband had a greyish look about him and she got a very strange feeling. That night, when he was stricken with a heart attack and she heard an emergency siren in town go off, she just knew something had happened and headed straight for Jean's house. Sue was also with Jean when they pronounced him dead at the emergency room.

It's interesting how people come into, and sometimes leave, our lives. We all have roles to play.